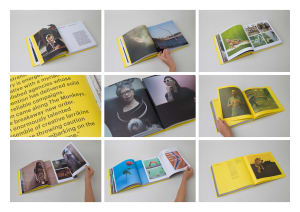 The Monkeys has produced a hardback book to celebrate the first 10 years of the independent agency founded by Scott Nowell, Justin Drape and Mark Green. It’s a piece of Australian advertising history.

Over 400 pages, the bright yellow square book documents the culture, campaigns and people that have made the Australian independent so iconic

It was put together by Semi-Permanent director Murray Bell and has contributions from many of The Monkeys staff and clients including Telstra’s Joe Pollard and Qantas’ Olivia Wirth.

Everything you’d expect is in there, as well as a few things you wouldn't necessarily expect, like excerpts from the email resignations and farewells of former Monkeys, and a photography series in homage to the Sydney suburb of Redfern, which the Monkeys called home for the first nine of its 10 years before moving over to Surry Hills last year.

It also documents the agency’s TV and film work including :30 Seconds, My Family Feast, the SBS series it created with Hopscotch Films and benchmark Films, and the 2016 documentary on Aussie brand Mambo.

The Monkeys cofounder and CEO, Mark Green, says: “We don’t have to subscribe to some international ethos that we are trying to interpret locally, or that we don’t quite understand because we didn’t create it in the first place. We can make the most of what we see in front of us; doing things we haven’t done before and that takes us to more interesting places and it gets addictive the more you do it. It’s about trying new things: you want to do it more often because you get excited about what you don’t know, and one day is never the same as the next.”

If you want to get hold of one for yourself contact The Monkeys and the first 25 people will get a free copy.

Read the AdNews 2016 feature about The Monkeys:  Ten years of monkey business