The Masked Singer launches to the tune of 1.16m metro viewers 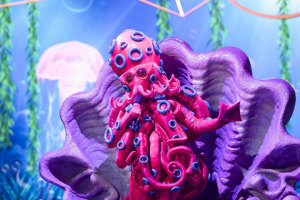 Last night, five performers dress as The Prawn, The Alien, The Robot, The Unicorn and The Wolf took to the stage. Only one celebrity was revealed overnight, with the show drawing a national audience of 1.56m.

The show's early success gave Network Ten it's best launch numbers since the first episode of I'm a Celebrity Get Me Out of Here in 2015.

“We’re really excited to have launched The Masked Singer last night. The show topped the night as a national conversation kicked off to guess which celebrities were behind the mask," Network Ten chief content officer Beverley McGarvey says.

“Congratulations and thank you to Jackie, Lindsay, Dave, Danii and Osher, the brave celebrities and the amazing team behind the scenes at Warner Bros and 10 who have done a brilliant job in launching the series. The fun continues tonight as an international star is revealed.”

Elsewhere in primetime, Nine's The Block felt the sting from Ten reaching just above 800,000 metro viewers overnight, with a total national audience of 1.11m.

Due to the end of Australia's Got Talent on Sunday night, Seven's broadcast of the AFL's Brownlow Medal event aired to 880,000 metro viewers.

In the overnight main channel battle, Seven won the night, boosted by its news bulletin, Today Tonight and the Brownlow Medal, taking a dominant 26.7% share.

Ten came in second following the success of The Masked Singer and Have You Been Paying Attention?, which drew 823,000 metro viewers, taking an 18.2% share. This left Nine in the rarely taken third place, with 16.8% for its main channel share.