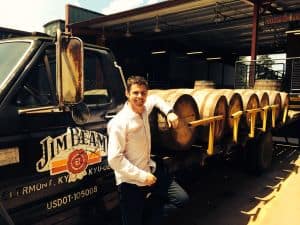 Two weeks ago, footage emerged of a freak weather incident in 2003 at the Jim Beam warehouse in Kentucky. It was struck by lightning, which ignited a spill of more than 800,000 gallons of bourbon that leaked into a nearby lake.

The alcohol caught fire and unique weather conditions created a tornado of fire – a ‘firenado’ – that whipped it up into the sky. It looks as dramatic as it sounds. The brand is currently on fire in a different, and less destructive way.

At the Australian Drinks Awards two weeks ago, Jim Beam was named the most loved brand, stealing the accolade from rival Jack Daniels, as well as taking the brand of the year title from XXXX Gold. It also took home the grand prix alongside its long-standing agency partner The Works at the CommsCouncil’s Effies. The gong goes beyond recognising just great film craft or a clever idea, but looks at the long-term effectiveness of a brand’s marketing efforts.

At the Australian Drinks Awards, Beam Suntory, which also owns Canadian Club, won 14 awards in total – that’s more than any other brand has won in any single year before.

Jim Beam also won best ad campaign, best presence in social and two innovation awards for its Devil’s Cut, which is made by sweating out the spirit left in the wood of the barrel.

Twelve months ago it was in much worse shape. The category is flat but Jim Beam is one of the only brands in growth – up 2% YOY, and there’s 10% between it and its biggest competitor, Jack Daniels. But that success hasn’t been overnight.

Fred Noe is the current Jim Beam master distiller. He’s the great-grandson of founder Jacob Beam and the seventh generation of Kentucky bourbon men who have upheld the traditions and values of the brand. They call him ‘the global ambassador’. That authenticity is better than any marketing ploy any adman can make up, Noe reckons.

“Our family started [Jim Beam] in 1795, and there’s been a family member involved since the very beginning. No one else in the industry can say that,” Noe said on his recent trip to Australia. “I get out into the market and people can shake my hand.

I’m a living, breathing person, not some fictitious character a marketing company has put together. It’s a true story and it adds legitimacy that no one else has.

The story about the brand is on the side panel of each bottle of Jim Beam. There are seven pictures of the seven generations. That legitimacy and brand story is something the beer category has been chasing with the growth of the so-called craft beer market, according to Beam marketing director Trent Chapman. But he doesn’t buy it.

“You look at craft bears and everyone is trying to pay the craft line, but Beam’s being doing it for 200 years; there is no more craft that goes into a brand than making Jim Beam,” he says.

“Everyone is talking about craft beer, but most of them are just made-up bullshit, excuse my language. And consumers are starting to see that. A lot of craft beers and spirits are commoditised; there is no truth to them or no real story like Jim Beam has. Our challenge is getting the story out there in a way that’s not contrived.”

That comes down to The Works. Jim Beam is one of the few non-Australian brands whose global strategy is dictated out of Australia. A global pitch in 2013 saw The Works partner with German agency Jung and US shop StrawberryFrog to work on the brand’s first global branding efforts.

The agency has worked on the creative strategy for Jim Beam in Australia since 2003. It has worked with Beam on Canadian Club since 2007. On stage at the Effies, Damian Pincus, the agency founder, was open with the fact that for the first two years, the agency basically screwed up, but the brand stuck with it and the longevity of the relationship is behind the success the spirits company is currently enjoying.

“It’s quite amazing that a little agency in North Sydney is leading a global brand. I pinch myself. It comes from a high level of trust between Beam Suntory and The Works. We can challenge each other and we’re focused on the work, not navigating politics, and that comes out in the campaigns,” Chapman says.

For the last two years, Mila Kunis has been the face of Jim Beam. A young Hollywood actress is not the typical choice for a bourbon brand, but Kunis isn’t your typical Hollywood star. Kunis “transcends ages and demographics”, according to Chapman.

“The gap between us and number two is only widening. A lot of the whisky brands are quite bland and talk about masculinity and archetypal males,” Chapman says.

“I think marketers are guilty of falling into that but I think Mila tapped into the new Australian masculinity. What The Works have taught me over many years is this point about having consistency, having the discipline to stay the course, but also evolve the creative.

“‘Make History’, [the brand’s tagline], is what we’ll continue to do.”