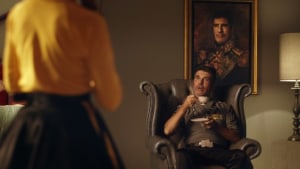 Nikki Webster, who had a hit with 'Strawberry Kisses' auditions for strawberry peach:

“We all know fruit salad is better with strawberries, I’ll wait for you to call."

The Tonight I’ll Be Eating franchise launched in 2017. Among the international celebrities making cameos, talent show judge, producer and celebrity manager Simon Cowell debuted as the Grey Wiggle in June.

Cowell, who is reviewing the applications, reflected on his Wiggle experience:

“I’m thrilled with the Uber Eats campaign, it was so much fun to make and I’ve had a great time being the grey Wiggle. What’s been amazing about the campaign is that it has connected so many people of different ages and backgrounds."

The Aussie quartet hoping to feature included Art Simone vying for Rainbow Wiggle, after an appearance on RuPaul’s Drag Race Down Under. The Bachelor's Abbie Chatfield gave Peach Wiggle her best shot.

Uber Eats head of marketing in ANZ, David Griffiths, says the Aussie celebrities' musical efforts have struck a chord when Australians are looking for a laugh.

“It’s been rewarding and hilarious to see so many Aussies rally around our campaign and support The Wiggles in their effort to outshine Simon Cowell as the intruding Grey Wiggle," he says.

"These latest celeb videos are just the rays of positivity we all need right now in a campaign designed to deliver more than just showcasing the diverse cuisines available on our platform.”