The Holden car retired as a symbol of Australia 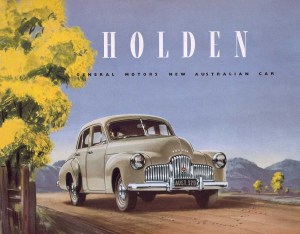 The Holden car, owned by generations of Australian families, is going from the 1970s advertising jingle: Football, meat pies, kangaroos and Holden cars.

General Motors: "With a heavy heart, Holden announced today that General Motors will be retiring the Holden brand in Australia and New Zealand. This announcement will be felt deeply by the entire Holden family, our customers and our fans."

The first all-Australian motor vehicle, first seen in Australia in 1948 with the FX model, was erased by "global consolidation of the automotive industry" which made it increasingly challenging to support a brand and a business that operates in only two markets, which represent less than 1% of the global industry.

The television commercial, based on a Chevrolet TV ad in the US, became a catchy jingle:

More recently The Monkeys produced this ad in 2018:

As well as this humourous one for a ute: