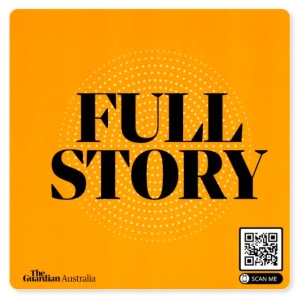 Guardian Australia is releasing, from Monday this week, a special investigative podcast series ahead of the Cop26 global climate summit, scrutinising Australia’s role in the climate crisis over more than two decades.

The five-episode special series, Australia v the climate, will launch in the week leading up to the summit, taking listeners inside the special deals, bullying, and brief moments of hope that have marked Australia's role in international efforts to
address global heating.

Hosted on Guardian Australia’s award-winning Full Story podcast and supported through philanthropic grants to The Guardian Civic Journalism Trust, it will tell the story of a country that has built a reputation of working against international efforts to deal with the climate crisis - of missed opportunities, vested interests, and diplomatic tricks.

From the aggression of Kyoto and the chaos of Copenhagen to the high hopes of Paris, Australia v the climate will take listeners behind the scenes by speaking to the people at the coalface: prime ministers Malcolm Turnbull and Kevin Rudd, Tuvalu’s Enele Sopoaga, delegates, activists and lobbyists.

And as leaders and diplomats prepare to meet in Glasgow for what has been billed as the world’s best, last chance to get the climate crisis under control, the series will prime listeners on the key things they need to know - where the world is now, what
has happened over the past year, what to expect, and where Australia fits into it all.

“Guardian Australia has a proud record of reporting on the climate crisis when others have turned away,” said Taylor. “This series builds on that legacy, drawing on Guardian Australia’s unrivalled expertise in climate journalism to give vital context
ahead of Cop26.”

Morton said: “It has been an extraordinary opportunity to look in detail at how Australia has influenced and disrupted international climate action over the past 25 years. I think people will be surprised at what we've uncovered.”

Readfearn said: “We’ve tracked Australia at international climate talks from the late 90s until now by speaking to the people who were there at all the pivotal moments.

“What has Australia done to earn such a bad reputation on climate? From more than 30 hours of interviews, I think we've got a story that will shock and inform everyone - whether they've followed this stuff closely or not.”