The four brands getting it right on Snapchat 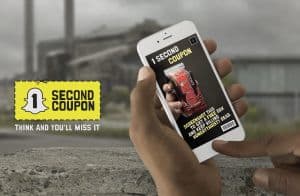 From being branded meerly a tool for sexting, it has become a platform that blue chip brands and publishers are getting serious about, but its hard to monetise.

These are the four brands that are getting it right on Snapchat:

With its agency, The Monkeys, it launched the “world's quickest coupon” on Snapchat. The brand sent out coupons for free Oaks for people to screenshot and redeem to celebrate the launch of its Snapchat account. In just three days all 500 coupons were redeemed and the brand received 1400 new followers.

To extend its TV show, Air Rescue, Westpac and MediaCom created a bespoke brand called Heroes of the Sky to show the hero's point of view with Snapchat. The brand and agency shot videos as rescues were conducted to give consumers an idea of what it was like to be winched up in a helicopter. It reached an audience that might not watch the TV show.

The World Wildlife Fund took the Snapchat selfie to a whole new level, with the charity sending out photos of five different endangered animals, all with the same caption "Don’t let this be my #lastselfie".

The brand said in a video about the campaign: “In a way, Snapchat is a mirror of real life. The images you see are transient, instant, unique, yet only live for a few seconds. Just like these endangered animals”.

The car brand teamed up with satirical site The Onion around the SuperBowl to promote the Audi A3 to first-time luxury buyers and to engage a younger generation. It posted snaps from stock photos with captions that made jokes about aspects of the game and half-time show. The brand received 5500 new followers on Super Bowl Sunday and 5000 in the two days leading up to the event.