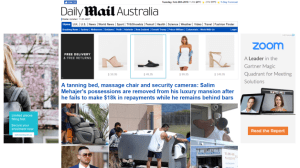 The Daily Mail has experienced a 17% year-on-year decline in audience to 2.6 million unique users, according to Nielsen's Digital Rankings for January.

News.com.au retained its top spot in the Nielsen Digital Rankings, growing 2% year-on-year to an audience of 5.4 million.

Smh.com.au retained fourth place despite a 3% drop to 3.9 million readers. However, the smh readers spent far longer on its website than rivals, an average of 1 hour and 9 minutes compared to 38 minutes on news.com.au.

The longer time spent on the platform means that each reader is likely to be served with more ad impressions. Nine.com.au also had a substantial average time spent per user of 56 minutes.

There was movement in the order of the next six newsbrands compared to a year ago.