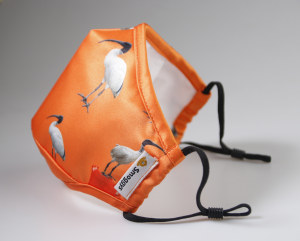 The first two designs, bin chicken and koala in adult and child sizes with a P2 rating for air pollution, have been released for pre-sale at $20 each following a successful $10,000 GoFundMe campaign.

Smoggys are the creation of four 20-something professionals from Wavemaker and Ogilvy who used their skills in response to the bushfire crisis.

“Smoggys’ aim is to protect our nation from the smoke and act as a public symbol that Aussies have come together to help and support our firies," says Marco Del Castillo, a Smoggys Founder.

Lucas Fowler, another Smoggys co-founder, added: “As a nation, we are indebted to the heroes and heroines of the RFS, who are out on the front line fighting the fires, day in and day out. While we are in the cities complaining about the smoke, there are people in the bush doing it far worse and we need to unite together to support the firies as much as we can, so that they can continue to protect us and our land.”

A P2 mask is considered one of the more effective ways to limit exposure to toxic bushfire smoke and PM2.5 particles.

Proceeds from Smoggys, created by Bec Drummond and Marco Del Castillo from Wavemaker and Jack Burton and Lucas Fowler from Ogilvy, go to the Rural Fire Service.