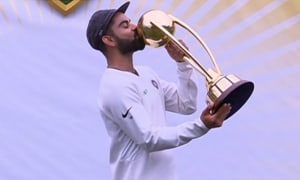 Test matches in Australia were known for drawing in strong and consistent audiences for Nine and were a staple of summer schedule for the network.

Following the change in broadcast rights last year, which saw Seven and Foxtel become the "new homes" for cricket, AdNews crunched the numbers to see how the first Test series between Australia and India shaped up.

Under the new broadcast deal, the Test series, arguably the most important code in cricket was broadcast live and simultaneously on both Seven and Foxtel.

In a historic series, India toppled the battered Australian side on home soil for the first time.

Seven says it went for six

Seven have already touted the first series as a resounding success stating that the four-test series "delivered bumper ratings", with the network taking 56% of the daytime commercial television ratings.

Seven also claimed dominant shares of the key demographics, securing 60% of the P18-49 demographic and 58% of the P25-54 demographic during the daytime.

The network added that 14.1 million people were reached by its Summer of Cricket, including more than four million people being reached on Boxing Day for the first day of the third test.

However, even with Seven staking their claim to Test Cricket success, metro audiences were still down 30% based on OzTam ratings.

Seven's figures, which exclude rain delays, claim the whole series averaged a national audience of 716,000 and a metro viewership of 487,000.

“Our partners have been thrilled with the success of their campaigns during this test series. The tremendous reach of the Cricket has delivered a massive audience, and has given our Cricket partners and all advertisers' unrivalled access to the key demographics they are targeting across the summer," Seven director of network sales Natalie Harvey said.

This year marked the first Test series to also be played live and ad-free on Foxtel. As part of the deal with Cricket Australia, Foxtel had won the rights to both broadcast and stream the entire summer of cricket.

This is the first time Foxtel has housed the Test series, with both Foxtel and its sales house MCN revealing it had exceeded the benchmarks it had previously set.

"The Fox Cricket channel has over the past few months exceeded our expectations both from a ratings point of view, and more importantly, quality of production," MCN national sports sales director Martin Medcraf said.

"The integration opportunities our advertising partners have experienced is world class and has provided the viewer with new and deeper engagement of the game.”

Australia were unable to hold off India's relentless attack

Overall, Foxtel's coverage was in-line with the figures it had previously generated with the international ODI series, with the second and third Tests averaging more than 250,000. However, the rain-delayed fourth test and the low rating first test saw Foxtel take a hit, with whole series average 240,000 viewers overall.

These numbers don’t include Foxtel’s streaming services such as Kayo, Foxtel Now, Foxtel Go and the Fox Cricket App.

When it comes to Foxtel's ratings, rain delays become an important consideration. As part of the deal, Foxtel launched a dedicated channel, Fox Cricket and, unlike Seven that can cut to news break and other programming, viewers could possibly stray from the network.

“Fox Sports is extremely pleased with the audience for our first Test series. This new content, plus our sophisticated integration solutions have meant we can continue to deliver our partners exciting opportunities and deeper, richer partnerships," head of Fox Sports Pete Campbell said.

When it comes to comparing Nine to Seven and Foxtel, the last comparable test between Australia and India took place over the summer of 2014/15.

However, before comparing the two series directly, it is important to note the decline in TV audiences over the past five years, which would have a moderate impact on the figures.

As this is the first year for both Seven and Foxtel, both networks will be looking to significantly improve ratings over time with the next Ashes clash to be played on Australia over the summer of 2021/22.

Nine will air the upcoming Ashes series, to be played in England, in August, with the network maintaining the live and exclusive streaming rights to the entire series.

Even though a reasonable ratings deviation can be seen when adding Seven and Foxtel's numbers together, buyers have questioned if this is the appropriate comparison to make, as buying must now occur over two networks as opposed to the singular in Nine.

Further cricket analysis of the first One-Day International series to air exclusively on Foxtel can be found here.