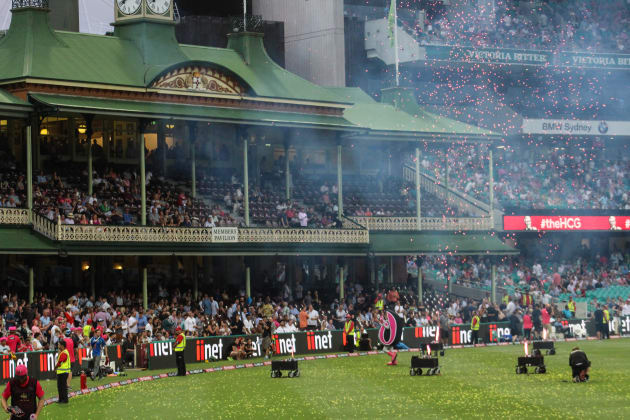 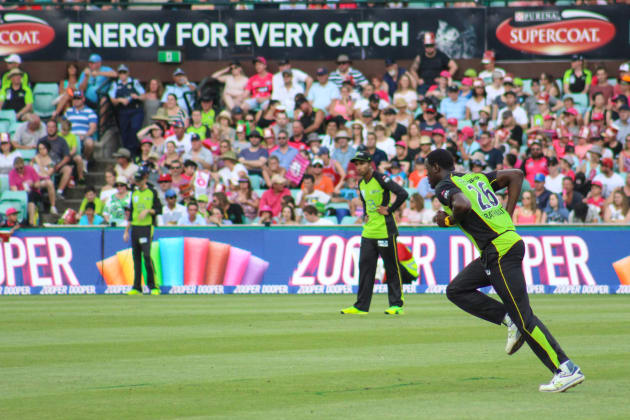 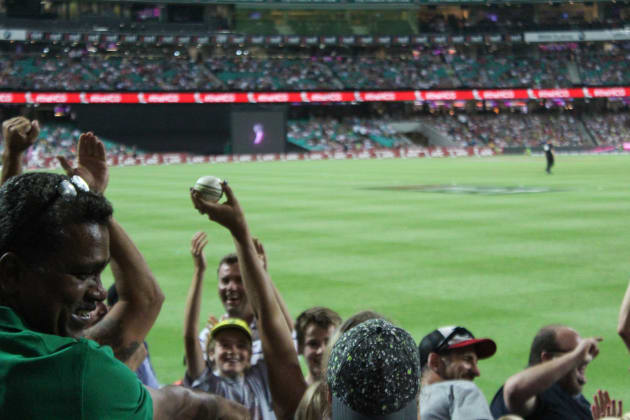 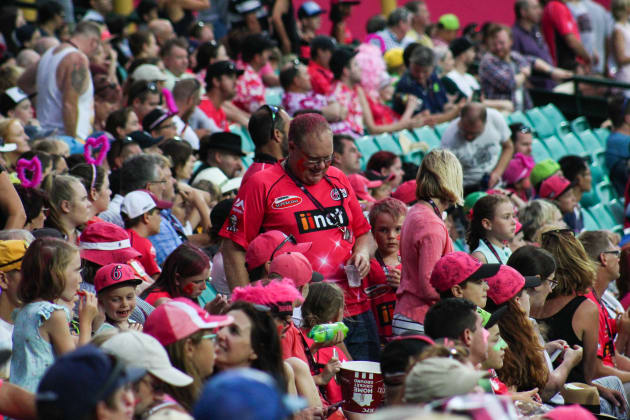 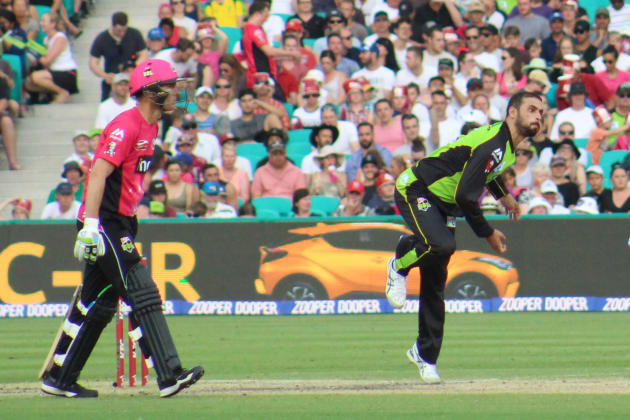 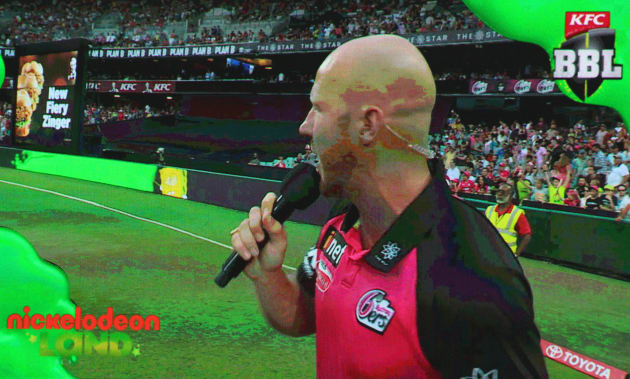 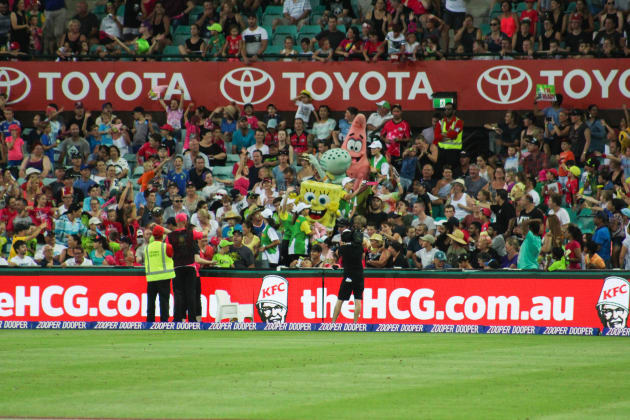 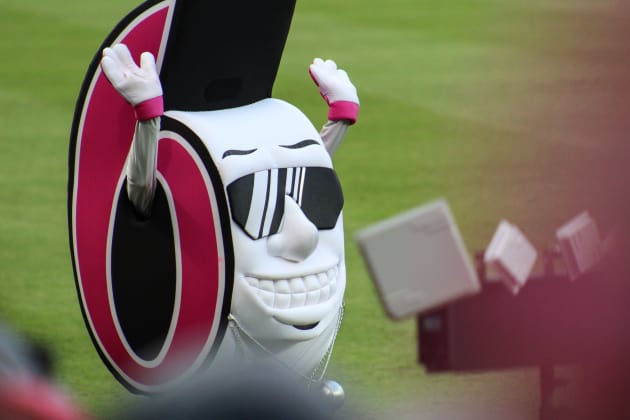 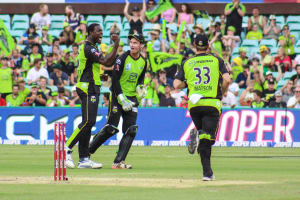 The KFC Big Bash League is on track to smash average attendance, ratings and revenue records as more advertisers and sponsors flock to the T20 competition than ever before.

This has helped BBL broadcaster Ten lift premium advertising revenue by 20% on last year and attract new advertisers and sponsors to the code.

Average match ratings have steadily grown by 22% over the past three season, with a national audience of 1.01 million viewers per regular season match as the competition moves into the semi-final phase tonight. Average match crowds are up 8% to 30,534 – making the BBL the sixth highest attended sports competition in the world (see below).

The BBL doesn’t quite achieve the ratings of Nine’s cricket of summer when the two go head-to-head in evening slots, and only has one session among the top 20 of the summer (game two between Adelaide Strikers and Brisbane Heat drew a national audience of 1.28 million - a regular season game record). But the competition has been gaining ground on its more mature cousin, which has always been a dominant force on summer TV (see below for a comparison).

Last week, the BBL performed better than the Seven’s Australian Open coverage in three of the five nights the competitions went head-to-head (see below for a comparison).

“This season has been sensational. We’ve had huge commercial share growth too,” Ten’s director of revenue and client partnerships Rod Prosser tells AdNews.

“The upside for us in the current ratings has just been the demand on the trading revenue. We’ve been able to capture a lot of the last minute packages and premium package holder clients and also spot revenue.

“In terms of where we are around our premium revenue, and that consists of anything that would pay over the base rate card, we are over 20% up on where we were last year.”

Ten has been able to attract new advertisers to the coverage, particularly in the automotive sector. This is partly due to a restructure of partnership deals that had previously restricted competing brands. Sponsors include Coles, Bunnings, Sportsbet, KFC, Harvey Norman, Optus, Lipton and Kia.

“We’ve definitely got a suite of new clients on board and you just have to look at the sponsors this season. Coles is new, and Optus only dipped their toe in the water last year," Prosser says.

“This year the telco has invested a lot into its BBL sponsorship with BBL-specific TVCs and has sponsored the speed-o-meter – an integration that aligns with Optus network speed, linking the creative and in-program integration.”

Coles sponsors the backyard legends competition, which has been a hit with fans sending in backyard cricket videos the chance to win a backyard cricket match at home with BBL commentators. Another integration is the KFC’s Zinger moments, a play of the day.

Perhaps the simplest and cleverest of these is the KFC bucket, now almost a right of passage for bonafide BBL fans. This brilliant piece of marketing encourages spectators to wear an upside down KFC bucket on their head to be in the running to win a prize, but many bucket heads will wear their fried chicken helmet for the duration, providing KFC with greater brand exposure than anyone else.

This year, the BBL has teamed up with kid’s TV network Nickelodeon to provide family entertainment at the ground in the form of guest appearances by Sponge Bob and friends.

Nickelodeon and Ten have co-produced a kids BBL TV show called Crash the Bash, which introduces the game to a new, young audience in bite-sized, fun chunks. It's a deal that Prosser says been a success for all parties and helped Ten bolster its children's programming.

Not only does this help drive gate receipts and build upon the BBL’s family-friendly image, it also provides "a platform for Cricket Australia and the Big Bash to talk to the grassroots level – kids".

“The greatest thing about Big Bash is the participation from the family-friendly crowd and how that is incorporated into our broadcast. That’s the feedback I get from clients," Prosser says.

“It’s jam-packed, we’ve got a lot of commercial integrations in the coverage but it feels very natural and organic.”

Cricket Australia sets strict guidelines on brand integrations to make sure it doesn’t impinge on the match.

That said, the BBL, with all of its noise, colour and sideshows feels like a more natural fit for brands to join the party and engage with a receptive (and less inebriated) crowd than the longer forms of the game.

At a BBL match, fans can expect very loud music, random cooee sounds that echo around the terraces, fireworks to mark key moments, awkward looking mascots, cheerleaders, boundary interviews and brand integrations that add to the festivities and keep the audience engaged. That is, of course, in between big hits and quick wickets (see image gallery below).

It’s very family-oriented with marketing and pricing designed to pull in families with young children that would be more reluctant to commit a day at ODIs or tests.

The Americanisation of a fiercely traditional sport may sound blasphemous in principle, and will certainly turn off some cricket purists, but is going down a treat with Australian families.

It’s also proving to be a real magnet for brands looking to tap into Australia’s national sport in an environment where they can add to the fun.

This is also translating into more commercial interest in the Women’s Big Bash League.

“Our commitment is significantly bigger than last year in terms of what we are broadcasting,” Prosser explains. “It’s probably more of a challenging sell (than the BBL) because they’ve seen less of it but as we’ve gone into the season what weve done is pick out some nice packages andspot revenue on the short term market.

"That’s been really encouraging because it means as we go into next year we should get a bigger appetite from clients because they now know that it rates and is a great competition.

“I think whats unique about this code is it’s got family appeal andalso has a high viewership of women. Brands that are associated with the Big Bash are also targeting women, they’re one of the same.”

There’s little doubt the KFC BBL has flourished under Ten in the past few years, growing into one of the network’s premier properties.

Prosser believes the competiton hasn’t yet peaked and will continue to grow in terms of TV audiencece and attendance as the coverage evolves.

With 15 out of the 32 regular season games sold out and an average national TV audience of more than 1 million Australians, this is bold call, but who would bet against it.

More challenging for Ten could be holding onto the competition beyond next season, the last under its current contract with Cricket Australia.

Negotiations for broadcasting rights to the Big Bash League for the summer of 2018 and beyond are imminent with other commercial networks keen to get a slice of the action.

Dominating its timeslots: #1 in total people and 25 to 54s nationally 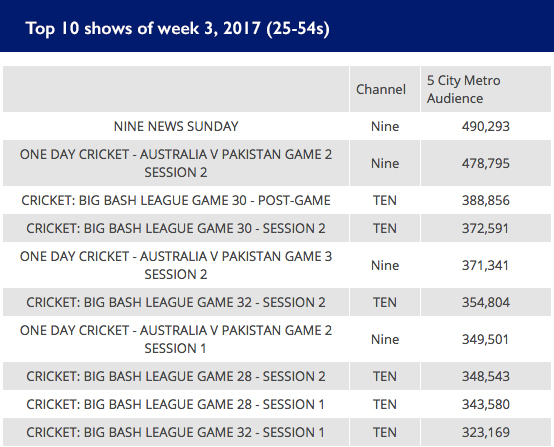 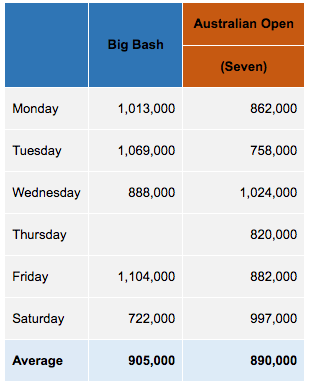