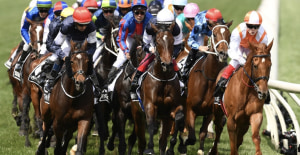 Network Ten's return as the official broadcaster of the Melbourne Cup has been met with a significant decline in ratings, with the "race that stops the nation" shedding some 500,000 metro viewers.

“We are building a very different and unique long-term broadcast partnership with the Victoria Racing Club (VRC) that exists on all platforms and has captured a much younger audience by showcasing all the racing, fashion and entertainment across this iconic carnival."

Vow and Declare became the first Australian horse to win the Melbourne Cup since Shocking in 2009. It was also the first Melbourne Cup win for jockey Craig Williams and trainer Danny O'Brien.

The Cup itself has been marred by recent social and political calls to action following an investigation into the horse racing industry in Queensland and the manner in which retired racehorses are put down.

The event also had its lowest attendance in 25 years, as it appears many of Melbourne's typical racegoers avoided this year's event.

Commentary from multiple news outlets overnight has also revealed a decline in corporate attendance and engagement, with those present at yesterday's event also throwing their support behind better animal welfare.

Yesterday, AdNews spoke to multiple sponsors to gauge their response to the controversy and what impact that would have on partner engagement with the event going forward.

Ten's coverage of the event was still the highest-rated program of the day, with its coverage of the 'Presentation' and 'Mounting Yard' drawing 1.13m and 830,000 metro viewers, respectively.

Network 10’s multi-platform coverage of the Cup saw over 12 hours of live and free coverage from Flemington including live broadcasts of Studio 10, 10 News First (Melbourne, Sydney and Brisbane) and The Project.

Network 10 is the natural home of the Lexus Melbourne Cup and we are delighted that so many Australians engaged with our extensive, multi-platform coverage," Ten chief content officer Beverley McGarvey says.

“Thanks to everyone at the VRC, our sponsors – Lexus, Zyrtec, Myer, Harvey Norman, TAB, Kennedy and G.H. Mumm – and all the very talented people at 10 who made this year’s Cup such a success.”