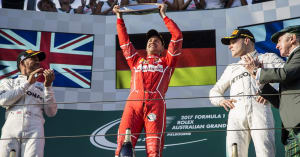 The clinical Sebastian Vettel victory attracted a national audience of 963,000 and peaked at 1.18 million. There were also 42,000 live streams and 213,000 social media interactions.

It placed eighth overall in the top 20 programs, with Nine’s Married at First Sight holding first place with 1.57 million viewers, followed by Seven’s My Kitchen Rules with an audience of 1.11 million.

In its timeslot, the race ranked number one among people 25 to 54, under 55s and total people with commercial shares of more than 40%.

Former F1 star Mark Webber says it's great to see the race  resonated with so many Australians.

“Formula 1 has seen a big shake-up this year and the atmosphere was electric at Albert Park this weekend. It is great to see that the race also resonated with so many Australians watching Network Ten at home.

“The Formula 1 Rolex Australian Grand Prix is one of the biggest sporting events in the country. To see Sebastian Vettel on the top step of the podium on Sunday was a thrilling end to a spectacular weekend of racing."

Fox Sports coverage of the race attracted an audience of 207,000 - the highest across Foxtel for Sunday beating the NRL Dragons vs Warriors game (206,000) and the Fremantle vs Geelong AFL game (191,000).

The weekend also featured the inaugural grand final of the AFLW competition between Adelaide, the winners, and Brisbane on Saturday. This attracted a metro audience of 385,000 despite only 25,000 fans watching in Sydney and no melbourne team taking part.

Seven’s Sunday night program was the third most watched entertainment program of the evening (909,000), following by ABC’s crime drama series Vera with 780,000 viewers.