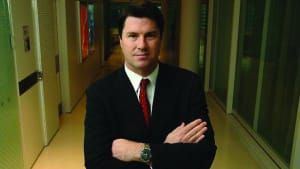 McLennan stepped down from both of his roles effective immediately, with non-executive director David Gordon taking up the mantle of chairman. His departure has also spurred a restructure of the board.

McLennan said the proposed investment by Foxtel in the company – still under consideration by the ACCC- and the transition of its sales activities to Multi Channel Network (MCN), announced in June, meant that his “role is complete” at Ten.

Gordon's first appointment under his new role as executive chairman is to reduce the size of the Ten board to six directors: two independent directors (including chairman), one representative of Foxtel and three representative of existing major shareholders.

Anderson joined Ten in 2003 and has held the role of CFO since March 2011. He was promoted to the role of COO in April 2014 with oversight across all areas of the business.

Under the terms of his agreement Anderson will see fixed remuneration is $1.25 million per year, subject to an annual CPI increase or 3%, whichever is the greater.

Gordon has been a director of Ten since April 2010 and closely involved in the deal with Foxtel and MCN.

“Hamish will work with myself and Paul Anderson on a seamless transition and he will continue to advise and assist the company until the end of the year,” Gordon said.

“Ten is in an important and exciting phase, as we continue to build our revenue on the back of strong audience growth since mid-2014 and transition our sales activities to MCN; and maintain our clear focus on growth and efficiencies.”

Ten said it will undertake a selection process for a new CFO to replace Anderson.