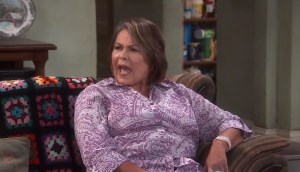 Channel Ten has followed suit with US broadcasters, deciding to pull revived sitcom Roseanne from the air, following a Twitter tirade by star Roseanne Barr.

The show has been canceled in the US by broadcaster ABC.

The controversy began when Barr made a racial slur on Twitter about a former member of the Obama administration, adviser Valerie Jarrett.

She said Jarrett looks as if the Muslim Brotherhood and “Planet of the Apes” “had a baby.”

She quickly deleted the comment but not before drawing more ire for replying to a Twitter user stating, "Muslims r NOT a race".

Muslims r NOT a race.

“Network Ten is appalled and disgusted with Ms Barr’s racist tweet and has removed Roseanne from Ten and Eleven, effective immediately,” a spokesperson from Ten said.

Barr has since apologised for the tweets, which also saw her take aim at Chelsea Clinton, daughter of Bill and Hilary Clinton.

ABC Entertainment president in the US, Channing Dungey, issued a statement, saying: “Roseanne’s Twitter statement is abhorrent, repugnant and inconsistent with our values, and we have decided to cancel her show."

The show has been a hit since returning to American television, with strong ratings in the key 18-49 demographic.

Recently, the ABC pushed Roseanne as one of its strongest performing programs during its upfront presentation to media buyers in New York.

Barr's co-stars have also taken to Twitter to condemn the comedian and actor, with head writer Wanda Sykes stating she was quitting before the show was axed.

Roseanne’s recent comments about Valerie Jarrett, and so much more, are abhorrent and do not reflect the beliefs of our cast and crew or anyone associated with our show. I am disappointed in her actions to say the least.

I will not be returning to @RoseanneOnABC.