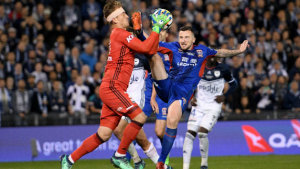 AdNews attended the media event, where the telco announced it had secured the live mobile rights for football until 2023.

The deal between is a result of a sub-license agreement between Telstra and Fox Sports, and does not include the 2018 FIFA World Cup, which is licensed to rival Optus Sport.

Under the streaming rights deal, Telstra will create and launch the new “My Football Live App” with live matches available via the Telstra Live Pass for existing Telstra mobile customers.

The streaming itself will be taken from the 'dirty feed' supplied by Foxtel. All advertising that appears in that broadcast will also appear on the Telstra app, similar to what the telco does with its NRL and AFL streaming.

Telstra group executive of media and CMO Joe Pollard says the new deal is about standing out in the digital and streaming market by offering a complete, 52-week sports package.

"Sport is a big differentiator for our consumers as a reason to be with Telstra. The fact that it is a summer sport gives us the opportunity to have sport all year round," she says.

"The 52-week sport proposition will hopefully bring in new customers that are attracted to Telstra who weren't attracted before, and this will be the reason. For our other sports lovers, it will be the reason to stay, because now you have the complete sport package."

Pollard said the company would not rule out adding further sports to its stable, such as the EPL (which recently extended its broadcast partnership with rival telco Optus for three years) and other international codes.

"Optus has obviously just renewed for three years, but with any piece of content that comes up, we will have a look at it and assess if it something we wanted to deliver to our customers, if it is the commercially right thing to do," Pollard said.

Telstra has delivered strong results from its sports streaming stable over the past 12 months. Subscriptions to its sporting apps have increased to more than 1.5 million in 2017.

A soccer app similar to AFL

Telstra director of product development innovation Rebecca Haagsma said while the app is yet to be built, the telco will look to commercialise it in a similar fashion to the recent AFL streaming app.

"We are in the process of doing this now, obviously the app isn't live, it goes live in June and then we and then we will have the full app live in experience in late September for October," she says.

"We are currently still designing those placements and where they will go at the moment. If you look at some of the other app we run and publish, the AFL is a good example, you'll see some similar advertising in there."

Telstra will not be handling the ad sales as part of this deal, operating only as the FFA's dedicated technology partner. Telstra would not confirm its sales partner but stated one had already been secured.

The original FFA rights deal was signed in late 2016 and worth $346 million. Fox Sports broadcasts all A-League matches, Socceroos and Matildas games, while Ten simulcasts one A-League match a week, as well as Socceroos games.

FFA CEO David Gallop told AdNews he looked forward to seeing what the deal will do for attendances, stating he doesn't believe the increased availability of football content on mobile platforms will detract from attendance.

“To be able to get our content onto Australia's biggest mobile provider in the country is going to raise awareness and interest in football and, as all boats rise with the tide, we are very optimistic that this will help fuel attendance,” he says.

“We all know watching sport on your mobile is increasingly popular but I think it will be attractive to both a younger and older audience. I don't think it is going to just be for younger people, this day and age, even the most technically unsavvy people know how to watch footage through an app.”