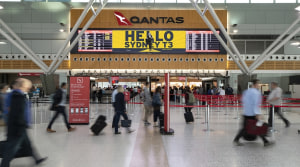 Sydney Airport has done well from a renegotiated exclusive advertising deal with out of home player JCDecaux.

The airport today posted its half year results with profit after income tax of $17.3 million, down from $173.2 million in the same six months last year, on weaker domestic passenger numbers.

Overall Sydney Airport catered for 21.6 million passengers in the half year. International passengers grew 1.9% to 8.3 million but overall passengers were down 0.2% due to a 1.5% fall in domestic passengers.

However, retail revenue, including advertising, was up 4% to $184.2 million, representing almost a quarter (23%) of Sydney Airport's revenue. The company didn't give a breakdown on the portion attributable to advertising revenue.

JCDecaux now has the exclusive advertising rights for Sydney Airport’s terminals 1, 2 and 3, plus the external arrivals and departures areas and aerobridges.

"It presents powerful opportunities for advertisers to connect with captive and valuable audiences within a world-class digital terminal environment."

The deal with Sydney Airport was originally between it and APN In 2018. JCDecaux acquired APN in October.

At the time the deal was announced, Sydney Airport said the advertising contract was negotiated on "significantly better" terms.

The airport then said this was "one of the largest out‑of‑home advertising contracts in Australia".