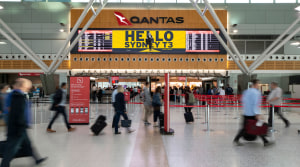 JCDecaux has revealed a multimillion-dollar investment at T3 Domestic terminal as Sydney Airport appoints the company as its exclusive advertising partner across all domestic and international terminals for the first time.

The outdoor player will launch more than 60 new digital and static opportunities at T3 that capture the premium Qantas travelling audience.

In addition, JCDecaux now has the exclusive advertising rights for Sydney Airport’s terminals 1, 2 and 3, plus the external arrivals and departures areas and aerobridges.

The newest advertising assets at Sydney Airport’s T3, which will launch on 22 July, providing new advertising opportunities for brands to connect with business and luxury travellers.

This new portfolio will connect with Qantas travellers at every touchpoint of their airport terminal journey, from check-in, concourse, gate lounges, baggage collection and the external airport arrivals areas.

JCDecaux will use its own Orbit geo-demographic data to reveal where the Sydney Airport audience lives and other socio-economic data, plus its Codex transactional data both at the airport precinct and beyond.

"It presents powerful opportunities for advertisers to connect with captive and valuable audiences within a world-class digital terminal environment,”

With 45 minutes average dwell time at T3, JCDecaux’s Pigeon Project found that 90% of airport travellers have considered or researched a product or service as a result of seeing advertising in an airport. Eight in 10 use their device to learn more while in the airport environment.

JCDecaux is the second major outdoor player to ramp up its investment in airport advertising this week.

On Monday, Oo!Media revealed six new large format digital billboards that will reach audiences on their way to and from airports around the country as part of its Fly network.

The new digital billboards include two on Joyce Drive – the gateway to Sydney Airport – that impacts international travellers through T1 and domestic travellers using the T2 and T3 when arriving or departing from 1 July 2019.