Major TV networks have taken a serious hit since the launch of streaming services such as Netflix, with Australian streaming video-on-demand (SVOD) subscribers now watching almost a third less broadcast TV than those without, according to new research.

But it’s not all rosy for SVOD players.

“Time spent watching broadcast is being cannibalised by streaming,” ZenithOptimedia’s insights director, Luisa Howard said. “Viewers are moving their quality time to SVOD and, for advertisers, this means eyeballs are moving to a space where we can’t reach them.”

The survey of more than 1,000 Australians aged 14-59 found the nascent world of video streaming is snatching the lion’s share of quality consumer engagement, with almost 40% reporting “very high” attentiveness while watching SVOD, compared to only 20% while viewing broadcast.

“Broadcast is now often background noise,” Howard said. “When viewers finish everything for the day is when they switch on SVOD and spend time focusing on a particular program. Our role is to build impact for our clients so even though we might get some reach points in broadcast, the really strong impact is in SVOD.”

The study found regular broadcast TV dominates from 6am to 7.30pm, hitting a peak share of 68% during the 5.30pm to 7.30pm timeslot, but streaming dominates the coveted period of 7.30pm until midnight.

Howard said for advertisers and clients, this shift means “we are being forced to be smarter about how we buy linear TV, in particular focusing on the earlier part of peak from 6pm to 7.30pm. We need to make sure we are in the genres that work for broadcast TV – reality, news and sport.”

Pinning down the elusive ‘light TV viewer’ continues to be tough, Howard said, with the report finding that advertisers wanting to target males under 40 – who often have above average income and are early tech adopters – will have no choice but to look further outside traditional TV for communications solutions.

“For advertisers that need to build campaign awareness very quickly – in a week or so – using broadcast TV is very difficult."

With SVOD penetration currently sitting around 15%, research firm Telsyte predicts 40% penetration by 2019 while Ericsson anticipates SVOD will account for half of all time spent viewing TV by 2020. 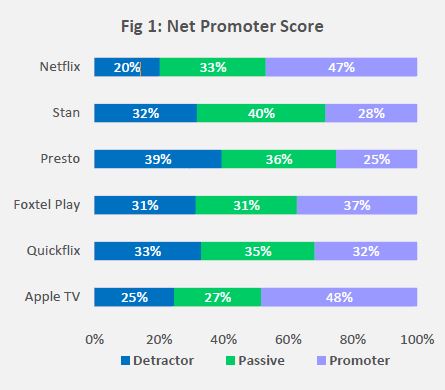 Despite services such as Netflix being popular with Australian subscribers, not all services are enjoying the same success, which could point to a reversal after the initial interest in new platforms wears off.

However, 39% of Presto subscribers and 32% of Stan subscribers report being dissatisfied with the services.

In September, OzTam CEO, Doug Peiffer, said the market has not seen a significant shift since the launch of over-the-top services.

Speaking at the ASTRA conference in September, Peiffer said albeit based on a very small trail, once the novelty factor of streaming services falls off, TV viewing habits come back up to normal.