Netflix is both popular with households in Australia, and its investors in the US.

Roy Morgan has published new research indicating that within two months of its launch, Netflix is in more than 400,000 households in Australia, reaching one million people.

Some estimates had 200,000 people in Australia using virtual private networks to stream US or UK Netflix content, but Roy Morgan said at the end of the first month there were 766,000 Australians signed onto the service. 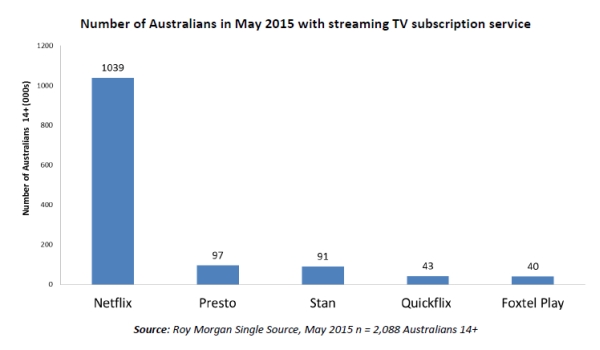 The research is based off a research panel of over 2000 people, and using the same methodology Roy Morgan said fellow subscription video on demand platforms Presto had 97,000 subscribers with Stan on 91,000.

Quickflix has 43,000 subscribers according to the estimate while Foxtel Play has 40,000.

Roy Morgan said while the gap may be huge between Netflix and the chasing pack, that Foxtel was still holding strong as the dominant paid TV content platform.

“But our early research also shows that the war’s far from over, especially when it comes to Foxtel,” Roy Morgan's general manager of media, Tim Martin, said.

“Over five million Australians live in a household subscribed to Foxtel, whether directly or as bundled with other services through a telecommunications provider such as Telstra or Optus -- and this currently includes around 300,000 Netflix subscribers.

“Are they adding Netflix, and planning to keep Foxtel too? Or were they holding onto Foxtel until Game of Thrones wrapped up season five last week?”

However, many say that there won't be one dominant platform to rule them all, with many observers predicting that people at least initially will be keen to mix and match their services to find the right fit for them.

The research shows that Australians are increasingly enamoured with Netflix, as are its investors after it announced a seven for one stock split in the US overnight.

The move means that shareholders will receive seven shares for every one held in a special dividend. The move is likely to provide some relief for the market, as Netflix's shares have been on a rocket this year.

In the time since January, its shares have more than doubled to close last night's trade on the NASDAQ at $681.19 per share. While the explosion in growth is great for people who got onto the share early, the high price of the shares makes it harder to sell.