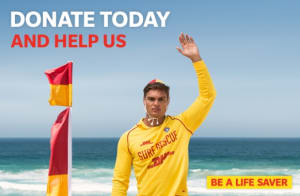 Surf Lifesaving Australia's biggest campaign in 107 years took six to seven months to produce, but all the material for it was gathered in just one weekend in a moment of serendipity.

The charity recently launched its national campaign with TV ads, radio, online, and outdoor all featuring as part of a focus on getting Aussies to 'put up their hand' for Surf Lifesaving.

“We are encouraging the community to becoming a part of the surf lifesaving community, and by putting their hands in their pockets they can become a surf lifesaver too and make a real difference to what we do,” the organisation's general manager of communications Melissa King told AdNews.

The organisation was given a helping hand from Telstra which will push the message through its channels, and media agency OMD Sydney which did the planning and buying pro bono. It is also receiving ad space from pay TV and free to air partners.

King said that while Surf Lifesaving had done above the line marketing before, it hadn't been a call to action as the current campaign is.

“We've done above the line before and the focus of that was more around positioning Surf Lifesaving, and hasn't been a call to action as such,” King said.

“What we wanted to do when we were looking at the positioning of Surf Lifesaving was to understand the community drivers for engagement and what Surf Lifesaving meant to Australia. We did some market research earlier in the year [2014] to get a feel for it.

“While Surf Lifesaving is a beloved brand, people didn't know we needed support.”

With months of market research under its belt, it had the basic concept of the ads ready to go, featuring real-life surf-lifesavers from around Australia urging the public to 'put up their hand' to either volunteer or give money to the organisation.

“Putting up your hand is just something Australians are taught instinctively to do from when they're very little if they're at the beach and they're in trouble. We wanted to play on that,” King said.

However, there was a problem. Getting surf lifesavers from each state to feature in the ads would have been problematic, to say the least.

“It could have been an issue, but we really wanted that authenticity around it,” King said.

They then looked at the calendar and realised the talent would, eventually, come to them.

“We have awards each year called the Awards in Excellence, which recognises the amazing work that our volunteers do and that actual event was happening in Sydney,” King said.

The cream of the crop were coming from each state in August, meaning they had to strike while the iron was hot.

“Luckily we had some good weather that weekend,” King said.

“We captured as much content as we could over that weekend to make sure what we were delivering was true to the movement.”

The organisation is hoping to raise $1 million per year from the effort, and says the campaign will be a yearly feature.

“In year one and two it's about raising funds and awareness, and as we grow the campaign there will be different elements delivered to continue to engage the community,” King said.

“That might be through events or different activities we'll develop.

“At the end of this particular campaign we'll do a post-research piece to identify whether the perception of surf lifesaving has increased, but also get some feedback on the elements to see how we can improve that.”