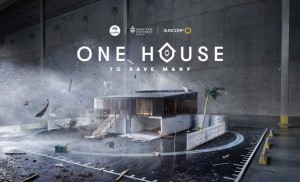 Suncorp has launched a new project, One House to Save Many, created by Leo Burnett in collaboration with The Glue Society.

As one of Australia’s largest insurers, Suncorp is determined to reduce the impact of extreme weather and help build a more resilient Australia.

This ambition led to One House to Save Many where One House was designed to withstand and survive catastrophic weather conditions.

The intent is to help reduce the displacement and disruption of life for Australians living in areas where these events are more intense and frequent, and to actually help change the way houses are built in the future.

Suncorp, with Leo Burnett and The Glue Society, worked with leading housing resilience experts James Cook University, the CSIRO and Room 11 Architects, to design, test and prototype a home that is truly resilient, a home that is more capable of withstanding fire, flood and cyclone.

Its story has been brought to life through a documentary airing on Channel Nine and a variety of films and informational content to inspire Australians and give them confidence that creating a resilient home is possible.

An online experience allows people to explore innovative building features and see ways of integrating them into their own home.

“The aim of One House to Save Many is to highlight how we can improve the resilience of our homes and encourage homeowners, governments and industry bodies to view resilience as a vital consideration for homes today," Suncorp EGM brand and marketing Mim Haysom says.

"The project was designed to generate conversation around building standards – as these must continue to be reviewed as the severity and frequency of our weather events increases.”

“This is an idea that has the potential to affect thousands of peoples’ lives. It’s remarkable to see how, time and time again, Australians demonstrate their resilience in the face of natural disasters," Fergusson says.

"Working with Suncorp, we wanted to do something that makes a tangible difference – that prompts changes in the way homes are built and encourages people to see that more needs to and can be done to withstand the inevitable impacts of climate change. ‘One House to Save Many’ aims to make more homes as robust as Australians themselves.”

As part of its renewed commitment to building a more resilient Australia, Suncorp has also launched ‘Built it Back Better’ – an Australian-wide first for home insurance.

Suncorp Insurance manager marketing Travis Hughes says that Build it Back Better demonstrates Suncorp is prepared to back its resilience strategy by taking tangible action to make homes that have been substantially damaged more resilient, by building its customers’ homes back stronger with recommended resilience options.

“This has been a project nearly two years in the making – and in asking the question if a house could be designed to tackle the extremes of weather, we discovered that the knowledge and expertise exists to solve this very real problem right now," The Glue Society director Jonathan Kneebone says.

"We are excited to see how the solutions presented may provoke positive change – and to continue to tell this vital story.”