The number of Australians paying for news has dipped from last year, with news consumption also falling from the height of the pandemic.

According to University of Canberra’s Digital News Report: Australia 2021, just 13% of Australian news consumers pay for news, compared to 14% in 2020. From 2016 to 2021, the number of news consumers paying for online news has increased by 4 percentage points.

Australia ranks below the global average where 17% of news consumers are paying for online news, up 2 percentage points since last year. The global average is based on 20 countries including Norway, Sweden, the US and Finland which all rank higher than Australia.

Additionally, 83% of Australians who don’t pay for news say they are unlikely to pay in the next 12 months and just 12% say they are planning to pay.

Regional Australians are less likely to pay for news compared to city dwellers in the future, with just 10% saying they will pay in the future.

News consumption has also dipped, with 51% of online Australians accessing news more than once a day, down 4% from last year. 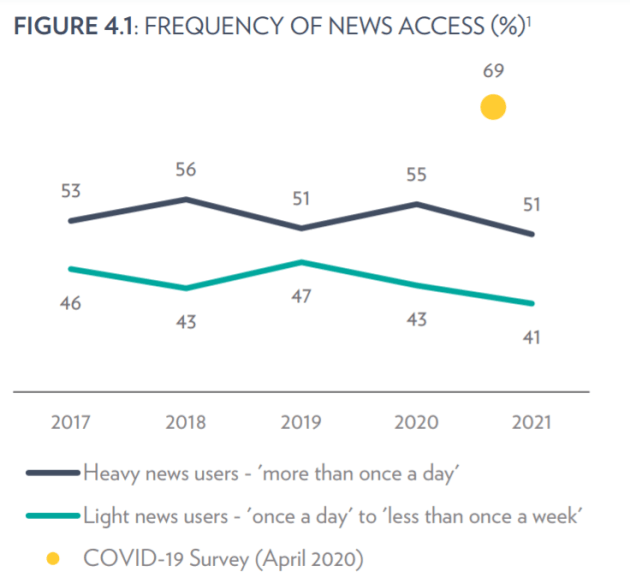 During the early stages of the pandemic, there was a steep rise in the level of news consumption, 69%, which has now returned to pre-COVID levels.