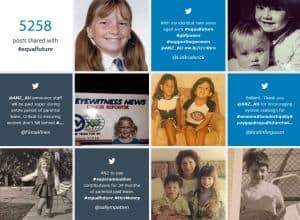 Stackla and ANZ have joined forces for the #equalfuture campaign, which aims to spread the message about creating a system that sees women succeed to the same level and at the same rate that men can.

The campaign aims to highlight that while girls often start ahead, in terms of speaking, reading and brain development compared to boys, there are still large gaps in the rate that women are educated, paid and the global wealth that they hold compared to the work they do.

To bring #equalfuture to life, the bank is putting up a dollar for every social post featuring the hashtag, and donating it to the International Women's Development Agency up to the amount of $100,000.

Being a social awareness campaign, the business looked to user generated content business Stackla, to help form the campaign.

On the specially created website the bank is using Stackla's platform to showcase the tweets and keep count of how many have been received.

Digital marketing manger Noor Hammad told AdNews, by incorporating user generated content the bank has really created a space where they can educate people on the issue.

“When it comes to some corporate responsibility pieces, some corporates just write a cheque and put out a press release, and you don't really educate or engage with anyone,” Hammad said.

“If you engage you not only get great content, but there's that authenticity when people genuinely contribute.”

So far the campaign has received 5258 tweets, with Hammad saying that when a campaign involves consumers it is more likely to resonate.

“The campaign is still running but the overall engagement of the campaign compared to others in the not-for-profit sector is much higher. When you turn it over to the audience, it can really make a campaign.”