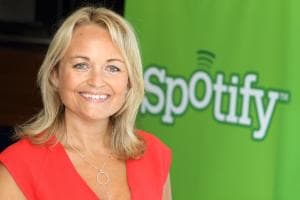 Spotify last month introduced a paid parental leave policy in Australia that goes beyond most already in existence. Staff can take up to six months paid leave, at any point of their choosing up until the child’s third birthday.

Current staff that have had children in the last two years can also take it retrospectively.

It's timely given the recent discussion of the existence - or lack of - paid parental leave schemes across the media industry, and within agencies in particular. Kate Vale, Spotify Australia managing director says it's “groundbreaking”.

The policy has its roots in Spotify's Swedish/Scandinavian origin where policies similar to this are common. In Australia, and across the advertising world it's a rare thing, however. Very few agencies are thought to have paid parental leave programs in place and it's incredibly rare for men to take more than two weeks leave.

Couple that with the fact that since the government’s paid parental leave scheme was introduced in Australia, just 500 men are thought to have taken it up. That speaks volumes for how socially acceptable it is for men to be the main caregiver for newborns - or how much awareness there is of it.

AdNews spoke to Spotify Vale and ‎director of communications Jim Butcher, who both have young children, on what the policy means for Spotify in Australia. Butcher took six months paid prenatal leave when his first daughter was born when he was working in Spotify's Stockholm office and will be retrospectively taking leave for the birth of his second child.

AdNews: In light of recent gender diversity issues across the agency space it's particularly timely that this would roll out. What's been launched at Spotify and why have you taken the decision to roll out this policy locally?

Kate Vale (KV): It's inspired by what's already in place in [Spotify] Sweden – but this is over and above what they currently get. At Spotify people are our most valuable asset, so rewarding them helps to build loyalty. For me this is an amazing policy, particularly in Australia, because it's literally groundbreaking. I haven't seen anything like it from anyone else. There are people within the company now that can take advantage of the policy retrospective going back two years. Jim [Butcher] is one of those and there's also someone in our sales team who just had a baby boy, and he's already taken a month of that leave, and there are other opportunities to go back out at a time of his choice to spend more time with his family.

AdNews: The cost of implemented paid parental leave schemes is often seen as a barrier for businesses. How do you rationalise the benefit of it to people versus the cost to the business?

KV: I think paid parental, particularly paternity, is quite new here [in Australia] and it's a shame it's taken so long. I think over time companies will cotton on to the idea that employees and people are key. I think you'll see it trickle through to the corporate world in Australia, but I think we are definitely behind the rest of the world.

Covering costs is an important thing to consider but when you think about retaining people that are key to your business, these are the right policies that get the right people through the door and keep your most valued employees within the business. When you lose employees having to replace them is incredible costly. I think we're going to be in a much better position by offering this policy.

AdNews: Can you put a figure on what it costs the business?

KV: No, but I know that there is some pretty in-depth analysis in Sweden, and even with the cost to the business, it's definitely worthwhile us doing.

Jim Butcher (JB): It's not just a cost thing, it's a headspace change as well. I remember telling my family when I was taking six months off to look after my first born, they couldn’t believe it. They were asking how and why I could do it. But I had to explain that number one, it's an amazing opportunity to spend time with my daughter and number two, from the experience of it, I came back six months later, completely recharged. I was better off with the knowledge I'd spent some time with my daughter, and that allowed me to work with a clearer mind, but it's a matter of a headspace change. People will come around, and hopefully others in Australia will follow our lead.

AdNews: What does the Welcome Back programme entail?

KV: It just allows staff to ease back into their job, to take flexible hours, to work from home or work part time. I'm definitely a believer in flexibility when it comes to family, There's not many days when I’m in the office past 5PM because I want to spend time with my children before they go to bed. It's a great way to ease parents back into the workforce rather than throwing them full pelt back into five days. Adjusting to not seeing your child every single day and the child care issues to deal with, a welcome back strategy is hugely beneficial.

AdNews: A lot of the conversations I've had around why there aren't more women in senior roles in agencies come back to the lack of paid parental leave schemes and flexible working conditions. It seems to be something that the advertising community lags behind on. Do you hope more companies will do something similar?

KV: I would hope so. We want people in the industry to understand that women and men require flexible working hours. It's parental leave that’s going to keep people in this industry. I know a lot of mums out there that I’ve become friends with over the last 15 years in this industry, that have literally dropped out of their role and not come back in because it's been too hard. And I think it’s particularly prevalent in this industry. I have so many girlfriends that just haven't come back because the corporate world doesn't really allow it, or make it very easy.

AdNews: It's obviously a positive step for employees to offer this policy but what are the challenges for the business to actually implement it and cover staff that do take leave?

KV: We've thought long and hard about this, and for me it's important to back fill [roles] when people are out. If Jim decides he's going to take five months off over the course of the year I can fill that role with someone on a contract basis. Yes it's a cost but it makes me very happy from a corporate and personal capacity that Jim is spending time with his family and often those temporary staff go on to become full time staff in the company after covering a parental role, so it's a good way to get more talent.

JB: It's just a matter of getting used to it. In Stockholm when I worked there [with Spotify], it happens all the time and people are just used to it. People do go off for six months and they come back.

AdNews: What would your advice to other media owners, agencies, or media companies be on setting something like this up?

AdNews: Do you think that one thing holding this back is that CEOs and senior management tends to be male and maybe there isn't the view that it's as important?

KV: I can't see the correlation of that, we have a male CEO. What we're doing in Australia is groundbreaking and I'm really keen to prove that it works and that policies like this can really benefit a business.