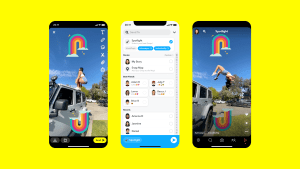 Snapchat has joined the competition against TikTok with its new feature Spotlight, which shares personal, creative Snaps to a public display platform.

The social media company is also encouraging users to create content for Spotlight with a daily US$1 million prize giveaway to users around the world who submit the most engaging Snaps to Spotlight.

The new feature sits within the Snapchat app, with users able to share content to the new platform by tapping Spotlight on their Send To screen. Spotlight will then surface the most entertaining Snaps for the app’s user base in one place, with videos becoming more personalised to each user over time, similar to TikTok’s format.

Rather than sharing updates about a user’s day, which is how Snapchat is commonly used, Spotlight is encouraging users to share more creative images and videos, such as dance videos or memes, also similar to TikTok videos.

“Snapchatters are some of the most expressive and creative mobile storytellers in the world and Spotlight gives them an opportunity to share their creations broadly,” Snapchat said in a statement announcing the new feature.

“With over 4 billion Snaps created each day, Spotlight empowers the Snapchat community to express themselves and reach a large audience in a new way.

“Spotlight was designed to entertain the Snapchat community while living up to Snapchat’s values, with their wellbeing as a top priority.”

The feature is available in Australia, the US, Canada, New Zealand, The UK, Ireland, Norway, Sweden, Denmark, Germany, and France, and will roll out to more countries in the future.

The move from Snapchat comes after Instagram released its own TikTok competitor through Isntagram Reels. Reels, which also sits within the Instagram app, allows users to share edited short-form videos, set to audio, which can be shared in their Feed, Stories, and DMs. Instagram has also been pushing Reels through a redesign on the Explore page which prioritises Reels.