SMI: Ad spend was starting to stabilise before the coronavirus hit 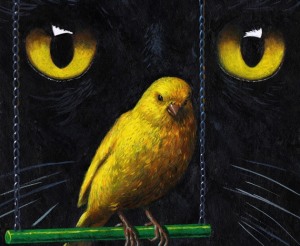 Ad spend as reported by media agencies showed a slower decline in February, suggesting the Australian market was beginning to stabilise before the COVID 19 crisis.

According to SMI (Standard Media Index) numbers, total bookings were back 5.3%, lower than the 6.1% decline across the eight months of the financial year to February, and an improvement on the 8.2% drop in January.

February was the 18th month in a row to record a fall.

Metropolitan TV delivered a 1.9% increase in spend, mostly due to Nine’s Australian Open finals broadcast in February
instead of January.

Regional radio sector grew bookings 7.8%, programmatic rebounded from the lower demand it’s experienced this financial year and was up 9.8% in February and the value of advertising to social sites grew 6%.

But the coronavirus is having an impact on ad spend.

"Already we can see in Australia that in March there’s been large increases in spending from the categories that are more likely to benefit from a lockdown environment, such as In Home Entertainment, Food, Toiletries/Cosmetics and Health Care,’’ says SMI AU/NZ managing director Jane Ractliffe.

"But the market is obviously making huge adjustments given major changes such as the loss of sporting events and the large movement of audiences.’’

SMI has also created this month an Industry Media Index, pulling together ad spend data from media industry associations to show the total value of the Australian advertising market hit $18 billion in 2019.

And the combined agency and direct ad spend figures include for the first time catalogues, inserts and direct mail media under and exclusive agreement with the Real Media Collective (RMC), the former catalogue and printing industry associations.

Across all major media, they have emerged as the fourth largest with $1.4 billion in ad spend in Y2019.

But when the Industry Media Index is viewed on a like-for-like basis (with RMC data removed) the total market is back 1% to $16.6 billion in 2019.

"Given the drought, fires and floods last year it’s unsurprising to see the value of the total Australian market fall in 2019 as these events always affect business confidence which in turn hurts advertising demand,’’ Ractliffe says. 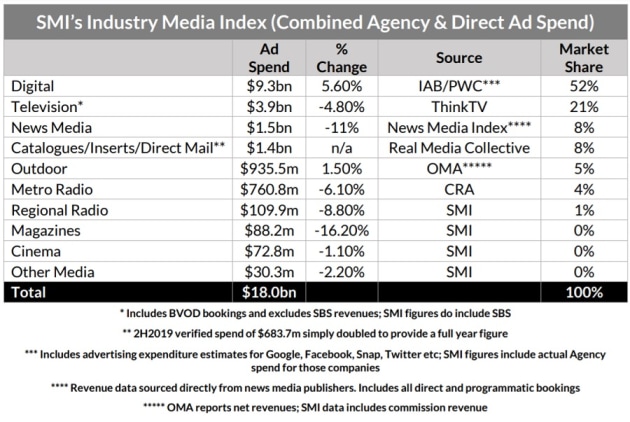