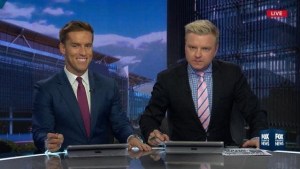 Thomson, pictured right, went on a tirade over the weekend at a charity event in Sydney.

Sky News and Fox Sports News presenter Greg Thomson has been suspended from his role, following a foul-mouthed rant at a charity auction in Sydney.

A spokesperson from Sky News confirmed to AdNews that Thomson has been suspended pending an investigation into his behaviour.

Thomson was hosting a charity lunch for disability support group Inala on Friday night when he broke into a rant regarding the behaviour of those attending the event, which comprised of 400 corporate guests.

Footage captured by 2GB showed the presenter becoming increasing agitated, repeatedly yelling at guests to "put your manners back in and sit down".

He went on to say the behaviour of the crowd was "disgraceful", before hinting that he would say a particularly vulgar word despite "women being in the room".

Eventually, an organiser took the microphone of Thomson after he was booed by the crowd.

AdNews has reached out to News Corp for comment.