Sheffield opens IAB Measure Up with rallying call around trust 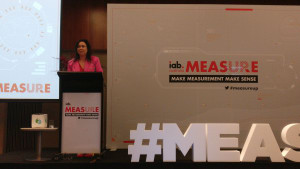 News Corp’s digital boss has championed the importance of trust in digital media and measurement to open the IAB’s Measure Up conference in Sydney.

Nicole Sheffield, who is also chair of the IAB board, said digital was under increasing levels of scrutiny and digital media publishers, platforms and market participants needed to stay on course to ensure standards of measurement and trust are not compromised.

“Digital is only 20 years old and only had an advertising business for 10 years,” Sheffield began.

“When you are only 10 years you normally don’t have the nation at your fingertips, but we do, we have 19 million users. We’ve grown from 5% of media budgets to in excess of 50%...when you grow big quickly get a lot of scrutiny. It is incumbent on us to stay committed to measurement.

“The most important thing you trade on is trust, trust is the secret sauce. [Advertisers] need to trust that every eyeball is real and engagement measures are meaningful… Australians need to trust the media they are consuming.”

Digital media measurement has come under shadow in the past year after social media giant Facebook revealed it had made several mistakes in how it measured certain metrics.

More recently the social media giant has had fresh questions raised about its claimed reach estimates exceeding the population of several countries, as revealed by AdNews.

Other issues around digital viewability, the ‘murky’ digital media supply chain, brand safety and ad fraud have also chipped away at the credibility of digital in recent times.

Sheffield said the pace of change of digital media and device technology made it a constant challenge to evolve measurement to keep pace.

She said that despite the challenges, the digital industry had also made great progress with the recent launch of daily content ratings.

In a later presentation, Commonwealth Bank acting CMO Monique Macleod revealed that the bank's decision to in-house its performance and programmatic marketing activity in 2015, as revealed by AdNews, was motivated by concerns over trust and transparency. Banks are particularly sensitive to ensure they protect customer data.