‘Be wary of academics’ IAB warns, poking at Ritson 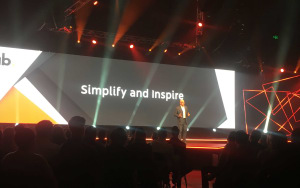 The stoush between the IAB and professor Mark Ritson rumbled on throughout Google’s Brandcast event last night as Vijay Solanki, CEO of the IAB, made some pointed remarks aimed directly at Ritson.

The IAB wants to make measurement sexy, so used its speaker spot at Google’s Brandcast event to shine a light on advancements it is making in digital metrics, howevber, it also used the moment to issue a warning for advertisers.

While Solanki didn’t mention him by name, he referred to an academic with a penchant for expletives, and it was clear who he meant. Ritson has been vocal in challenging the credibility of digital metrics and the way numbers are presented versus traditional media.

“We need to make measurement sexy. It's a topic we need to embrace and give a lot more love to,” Solanki began.

“We’ve seen a number of naysayers come onto stages a bit like this and question and challenge your digital investments. But here’s some simple advice without expletives, and without hyperbole.”

Solanki advised clients to use independent industry data alongside their own data to gelan insights, keep up with consumer behaviors across devices, and also warned against taking the words of academics too seriously.

“To help you navigate this digital world, work with real world experts. Work with people who have walked in your shoes and not just the academics,” he said.

“It’s clear and irrefutable that the consumer continues to immerse themselves deeper into digital. The reality is, that if you want to grab a consumer's attention traditional channels alone are simply not enough - but I think you know that.”

Ritson, who is also a brand consultant as well as an academic, isn't bothered though.

Unfortunately I can’t respond to Vijay’s personal dig. I’m heading the UK to headline the @FestofMarketing in front of 4000 people.

Ritson also hit back at some of the numbers Google claimed, questioning its 94% viewability stat.

In other news I am the Duke of Wankhampton and live in a small basket in southern Venezuela with Carly Simon and a cat called “bananas”.

Ritson and Solanki have clashed before with the IAB boss choosing to pen a column challenging many of Ritson’s pet topics ahead of a presentation from Ritson at the AdNews Media & Marketing Summit in Sydney in May.

Solanki, drew ire from Ritson during the event, who quipped from the stage: “I know you guys are fast in digital Vijay, but you usually have to see the presentation before you can comment on it.”

Solanki also called on the industry to collaborate to move forward, and likened the complexity of digital marketing and its many dashboards and metrics to being in the cockpit of a 747.

“We need a common language,” he said of digital metrics and was joined on stage by Nielsen’s Monique Perry who outlined the recently introduced digital content ratings (DCR).

DCR has been developed by Nielsen in partnership with the IAB to give advertisers “more confidence in digital investments and more insights into audiences”.

Read more about the Daily Content Ratings and what it means for advertisers here.

The IAB is running an event next month dedicated to measurement. Tickets for Measure Up are on sale now.