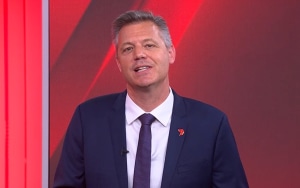 The Seven Network unveiled its plans for next year, under the tagline Kickstart 22, riding high on a bigger content investment, better data, more interaction with the audience and a sharper media buying platform.

The network, at its Upfront presentation today, outlined to advertisers and agencies more effective and easier media buying, and enhancements to its trading platform, including a project with Salesforce, the global leader in CRM.

Seven is upgrading its audience automation solution, CODE 7, with the launch of CODE 7+, a digital and broadcast converged media trading platform, using the latest in CRM technology from Salesforce and other leading technology vendors.

And the network is engaging further with its audience with 7Shop which allows consumers to instantly buy products they see on screen while streaming content on 7Plus.

This year has seen strong growth in the number of registered 7plus users, which have surged to almost 10 million today from 5.1 million in January.

“We are growing and we are winning,” he said.

“The New Year will bring the strongest start from Seven. We've invested heavily and are attacking Q1 harder than ever before with Kickstart 22 to turbocharge your brand and sales results.

“Kickstart 22 is a great opportunity for brands to secure guaranteed access and to dominate the biggest content in the first part of next year.

“At Seven West Media we live, eat, sleep and breathe unbelievable television, be it linear or digital. There's no difference. With the relentless focus on bringing Australians closer to the moments that move us.

“22 will be the third year in our three year plan, including the core pillar of content-led growth.

“When we started the theory plan, we knew that rebuilding the schedule wouldn't happen overnight. But it's fair to say we've done it in record time ... we're the only network that has grown its audience share this year.”

“The key message is about content driving the audience,” he told AdNews.

“New shows, new sport, new audience, coming in different ways across broadcasting BVOD, that's going to continue our market leadership, but it's good for the industry as well. It's a good, strong, robust marketplace. And some great content is happening.”

Content will include a stellar collection of returning shows, plus the Olympic Winter Games Beijing, the XXII Commonwealth Games, the AFL, the Supercars Championship including the Bathurst 1000.

In 2022, Seven’s hit entertainment shows The Voice, Big Brother, SAS Australia, Farmer Wants A Wife and Dancing With The Stars: All Stars will be joined by The Voice: Generations, plus the new AGT, Australian Idol and the return of My Kitchen Rules.