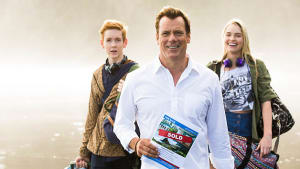 The drama series, starring Erik Thomson, picked up 1.82 million viewers and was the most watched program of the night. It was a jump from last week's, which picked up 1.05 million people.

The first show in the double-episode schedule of Big Bang Theory on Nine also saw a boost in audiences, picking up 1.02 million viewers from 974,000 last week, and was the third most watched program of the night.

Nine's repeat episode of the comedy series had 743,000 viewers as was the 12th most watched show of the night.