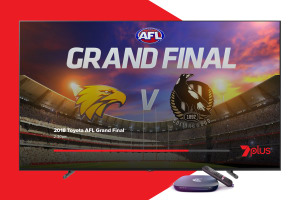 In an Australian first, Seven has revealed it will be streaming the 2018 AFL grand final to connected TVs, as it makes a greater push for addressable advertising across the product.

Seven will live stream all its grand final coverage to Telstra TV, Apple TV, Fetch TV, PlayStation 4 and compatible Android TV devices, which together account for over 70% of Seven’s Connected TV live streaming.

The game feed will remain the same as broadcast, with the network simulcasting all of the game day content but the advertising feed will utilise Seven's addressable TV solution to provide advertisers with further targetting opportunities.

"We have a number of advertisers who have taken up packages for this event through our addressable solution," Seven chief digital officer Clive Dickens told AdNews.

"Typically with the AFL we have to offer its official partners the first look at our advertising innovation, so all of the advertisers are those already associated with us and the games who are looking to up-weight their targeting."

Due to Seven only completing the deal this week, the majority of advertising is with existing AFL partners, rather than Seven going to market in the hope of on-boarding new clients.

Dickens adds that the expensive cost that comes with advertising during the grand final was also a reason Seven approached existing partners first, as the connected TV offering could be packaged with existing deals.

When it comes to viewer numbers Dickens says it will be very hard to gauge just how many viewers will tune into the event, partly again due to the short turn around time of the deal, but confirmed that it would be relatively small.

"Streaming audiences develop over habit and due to the tight window in which we have had to promote this new capability, we expect viewership to be a small subset of the broader audience," Dickens says.

Despite confidence in the broadcast, Dickens add that there is still concern around the quality of the stream, particularly following global streaming issues by larger platforms including Amazon during the US Open, as well as Optus' World Cup disaster in Australia.

"We're certainly confident that on the day we will be providing users with the best quality stream available, it's something that is going to go a long way for those who don't have access to the linear broadcast," he says.

"However, it would be remiss of me not to have some concerns given previous issues on the global stage and there is no doubt this is an emerging technology but we have to keep looking for more ways to develop and enhance these services."

According to Think TV, 46% of all Australian households now own a Connected TV, while broadcast video on demand live streaming numbers on Connected TV grew 122% year-on-year.