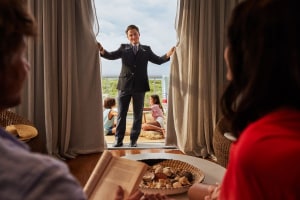 Virgin Australia has launched a new campaign to remind Australians of its award-winning customer service as Australians begin to plan their next holiday.

The Precinct created the campaign in partnership with Virgin Australia. The tagline 'Service so good you’ll want us everywhere' highlights the world-class service for travellers, irrespective of where they are seated.

A teaser of the hero video was released on Virgin Australia's social media channels over the weekend of October, before the TVC debuted nationally on October 24.

The campaign will continue to be aired across national and regional television during October and November, as well as on social media, YouTube and catchup TV.

The Precinct creative director Michelle Galluzzo says the campaign, which features Virgin Australia team members, is perfectly timed as Australians begin to plan their next holiday.

"With the highly-anticipated holiday season approaching, this campaign is a friendly reminder of Virgin Australia’s playful attitude and great service. It’s fun, relatable and an exciting time to show what they do best,” says Galluzzo.

The campaign coincides with the launch of Virgin Australia’s 'Yay for holidays' sale on October 25, offering fares from as low as $49 one-way in Economy.

“Over the years our team members have won multiple customer service awards, including AirlineRatings' Best Cabin Crew in 2021. The campaign beautifully harnesses the passion and dedication we have to our guests and the incredible service they experience every time they fly with us,” says Minogue.

Minogue says travel is picking up: “Since September, we have launched 12 new return services throughout Australia and we are scheduled to resume flights to Fiji in December, followed by Bali and New Zealand.”