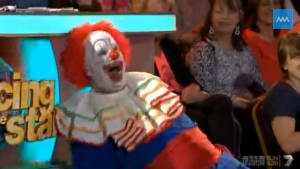 Holden in full flight during his performance. From the AdelaideMedia YouTube channel.

Mark Holden's clown routine on Dancing With the Stars may have induced nightmares, but it did deliver the show a ratings bump and a narrow winover Nine for Channel 7.

For those of you with the good fortune not to have seen the performance, Mark Holden performed in full clown get-up, with his performance labelled as bizzare and scary by judges.

The performance also drew heavy criticism this morning, in the media

While the performance was bizzare, it appears that word of mouth built during the routine and post-dance interview, with the show delivering Seven 946,000 metro viewers overnight. It also managed to pull in more than 500,000 regional viewers, taking the final figure to 1.48 million.

This was up on last week's figure of 882,000, although this week Dancing did not have to compete with The Block for viewers this week.

While Holden and Dancing With the Stars was the talk last night, Home and Away's dramatic plot line also managed to pull in 928,000 viewers with the next-best non current affairs program a new episode of NCIS on Ten.

The Seven network pulled in 28.3% of the total.

Meanwhile a strong curent affairs line-up from the ABC wasnt enough to overtake Network Ten, which benefitted from the performance of shows such as NCIS, The Project and Jamie's Comfort Food to take home a 20.8% share.