Sen. Fifield in firing line for accepting cufflinks from Foxtel 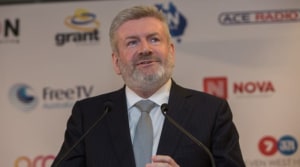 Communications Minister Mitch Fifield is copping flak for receiving a gift of cufflinks from Foxtel just a week after the media reforms deal was signed off.

Journalist Jackson Gothe-Snape posted a tweet showing a photograph of a senate document outlining a statement of interest for ‘cufflinks from Foxtel’ dated 19 September 2017. It has been dubbed bribery and corruption, by some on Twitter.

Communications Minister Mitch Fifield gets a gift of cufflinks from Foxtel
one week after giving them 30 million taxpayer dollars#AusPol pic.twitter.com/T8DXGTASIj

It also caught the attention of protest group Get Up! Which is actively involved in the push for marriage equality.

As part of the media reform deal, pay TV network Foxtel was guaranteed a $30 million package to "support the broadcast of underrepresented sports on subscription television, including women's sports, niche sports, and sports with a high level of community involvement and participation".

The $30 million has been questioned previously and drew complaints from Screen Producers Australia over what it was intended for. In July the ABC wrote that the government was refusing to reveal further details about what the $30 million was for.

Following the proposed reform package outlined earlier of his year it was understood by many in the industry as being a consolation deal for the changes to gambling advertising which would impact revenue the pay TV broadcaster was able to make on sports coverage. Therefore, the $30 million was intended to ensure women's and niche sports coverage, which attract less advertising dollars, would not suffer as a result.

AdNews has contacted the office of Senator Fifield and Foxtel.

When the media reforms package was announced, 30 Australian media owners put aside their differences and backed the proposals, including Foxtel.

CEO Peter Tonagh said at the time that while Foxtel wasn’t happy the changes to the anti-siphoning list did not go further, he and the company accepted that change was more important.

“We've had too many years in this industry of frustrated attempts at change where we each go back to our own corner and argue for what's right for us," he said.

"What makes today different is that we each stand here willing to accept that these changes aren’t optimal for any of us they don’t suit our individual businesses, but we stand here united because we believe they are for the greater good of a sustainable media industry.”

UPDATE: 3:30 PM: A spokesperson for Sen. Fifield tells AdNews the item was "below the Senate disclosure threshold requirements but was nevertheless placed on the Register for transparency."

They did not repsond to queries about what the gift was for, nor on any potential connection between the gift and the $30m.