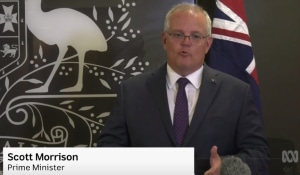 The giant digital platform today said it could pull its search function from Australia if the news media bargaining code is passed in its current form.

At a senate hearing this morning, Google's local managing director Mel Silva argued that the code - designed to force Google and Facebook to pay publishers for content - is unworkable and would “break” Google Search and its business in Australia.

However, Morrison told a media briefing after a national cabinet meeting that Australia makes the rules for what can be done in Australia.

"That's done in our parliament. It's done by our government," he says.

"People who want to work with that, in Australia, you're very welcome, but we don't respond to threats."