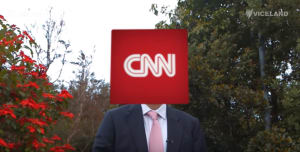 SBS has spoofed the now infamous Trump versus CNN video tweeted by the President.

With SBS' satirist Mark Humphries taking on the role of CNN, he addresses the camera to respond to Trump’s tweet.

The tweet, posted by Trump over the weekend, showed him wrestling and punching a figure during a World Wrestling Entertainment (WWE) event, but the head had now been replaced by the logo for CNN.

Also wearing a CNN logo, Humphries says: “My name is CNN and I was assaulted by the President of the United States.

“The bullying started a while ago, mainly online. Donald Trump started calling me fake news, which was almost as painful as me having to call him President of the United States.”

The camera follows ‘CNN’ to a swing set as he pokes fun at the fiery relationship between CNN and Trump.

“I was still shocked when he grabbed me by the pixel. It’s hard enough to explain to an adult that the leader of the free world punched you in a GIF.”

Fox News also appeared in the video: “Even we think this is too much and we are fucking nuts.”

The WWE brawl Twitter video has been retweeted more than 300,000 times, making headlines around the world.

A CNN spokesperson responded to the video saying it was a sad day when the President of the United States encourages violence against reporters.