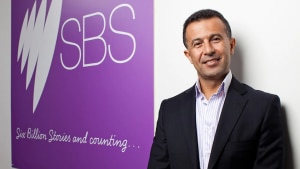 SBS CEO Michael Ebeid has stepped down from his role after more than seven years with the broadcaster.

Since joining SBS as its managing director in June 2011, Ebeid has led the organisation through a period of transformation and growth.

Ebeid is credited with leading organisational strategies and introduced new initiatives which have led to more Australians engaging with SBS.

“SBS is the strongest it has been in over 40 years. We are more relevant than ever and we are ready for the future," he said.

"We are the media organisation audiences can come to, on their preferred platform or device, for distinctive programs and different perspectives that create a better shared understanding within our diverse, multicultural society."

The move opens the door for the broadcaster's recently appointed chief audience and content officer, and well known media executive, John Sintras to step into the role.

Sintras exited IPG Mediabrands New York in June last year, where he was president of global business development and product innovation at the business, resurfacing at SBS earlier this year.

During his time with SBS, Ebeid halted the decline of television audiences, growing reach to an average of 13 million Australians each month engaging with the network’s channels.

He also played a role in transforming its content-making and distribution models to leverage its capability for diverse storytelling on digital platforms and launched two new free-to-air television channels in addition to NITV, which included Food Network and Viceland.

Ebeid also secured long-term rights agreements for the FIFA World Cup through to 2022, a 10-year deal for the Tour de France and negotiated Australian representation in the Eurovision Song Contest.

In 2017, he was made a Member of the Order of Australia for services to broadcast media and multicultural affairs as an executive, innovator and business leader.