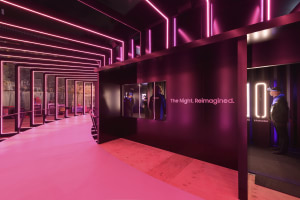 Filmed during the annual Sydney celebration of light, music and ideas, Samsung's 'The Night. Reimagined' activation has been turned into the brand's new TV ad.

Mixing the experience of the Samsung installation at Vivid – visited by 133,489 guests during the festival's 23 days – in the foreground of the Sydney Opera House, the Leo Burnett-produced creative utilises core frames shot on the Galaxy S9+ mobile.

The 15- and 30-second TV ads share the engaging experience of an evening at Vivid, with focus on the company's on-site activation at the event.

“Nothing like this has ever been undertaken by Samsung in Australia and we believe The Night. Reimagined is a wonderful example of how we can collaborate with partners to bring the brand to life by placing our technology at the centre of an experience,” said marketing director for Samsung Electronics Australia, Danielle Palmer.

“Enabling Aussies to do things they never thought possible is something we're passionate about.”

Highlighting not only the low-light camera capabilities of its flagship Galaxy S9 and S9+ smartphones, but the colourful spirit of the Vivid festival, the campaign features a vibrant trip with friends around Sydney's famous harbour.

The activation, by creative experiential agency Imagination, with PR from Edelman, was no light task.

The installation itself took around 1130 hours in development time and there were 24 days of pre-build construction, eight days of on-site construction, and 25 tonnes of infrastructure.

Managing director of Imagination, Antony Gowthorp, says it was "one of most remarkable projects" it has ever been involved with.

“Having visitors interact with technology on such an epic scale is something we’ve been so excited to see and proud to be part of," Gowthorp says.

To bring it to true dynamic life, positioning it as a shining beacon to Vivid visitors, there were 2km of LED strip lighting and 3.8km of power cabling.

The installation itself featured an 'AR emoji zone' where guests had the chance to transfer a selfie into a personalised AR emoji to be projected for 13 seconds onto the iconic smiling face of Luna Park across the harbour – as featured in the TVC.

“Leo's is constantly pushing boundaries, seeking to do what can't be done, and taking activations to new levels, as we have with The Night. Reimagined.

“This is another great example of how a brave client with a strong mission can help you do the exceptional and the audacious.”