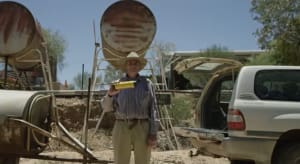 This yellow device fitted to a Toyota LandCruiser provides a mobile hotspot for desert dwellers.

One of the many challenges of driving through Australia's outback is no access to communication. Most of Australia's red centre doesn't have any mobile phone signal coverage - an area larger than the European Union.

In the event of an emergency, the isolation can prove deadly in some of the harshest conditions in the world.

But this may be about to change, thanks to a novel idea conceived by ad agency Saatchi & Saatchi for long-standing client Toyota.

Creative heads at the agency wanted to find a way to reward Toyota for its 20-year loyalty that would also benefit its customers and the community.

The agency teamed up with Flinders University and Toyota to trial new technology that could deliver emergency communications via Toyota LandCruisers. Ninety-percent of vehicles being driven in the outback are LandCruisers, creating a moving network of mobile communication hotspots.

A new device that combines WI-FI, UHF and Delay Tolerant Networking technology was fitted to 4WDs, each providing a mobile hotspot with a 25km range.

Anyone using mobiles with Wifi can connect to the LandCruiser Emergency Network and data is passed along between vehicles until they arrive to a base station that links to the outside world.

The network could prove particularly useful to help communication during emergencies like bush fires.

“There's a huge problem with communication in the outback with people either breaking down or getting lost,” Saatchi & Saatchi Australia executive creative director Mike Spirkovski tells AdNews.

“The idea was born out of a necessity and a need in a community and as a nice idea for Toyota LandCruiser loyalists and drivers.”

Toyota is exploring ways to install the devices to all new LandCruisers while older vehicles that frequent the outback will be able to buy them.

Once a network is established, it is hoped that emergency services will be able to use the network as required.

“It's very rare that you get the opportunity to do something that is more meaningful than the day to day of just making advertising,” adds Spirkovski.

“It's everyone's objective to help people. If we can even save one life or help five people make it out of a desert or a tough situation then we've done our job.”