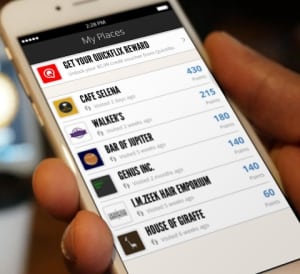 While Rewardle is normally associated with earning a free coffee, Quickflix has decided to use the brand loyalty app as a new marketing platform.

Users can use Rewardle to earn points towards free services or goods from merchants in exchange for repeat business, and the mobile phone app has teamed up with the subscription video on demand platform to offer users free Quickflix vouchers.

In the past two months, Rewardle says it has reached critical mass of more than one million users and has started to pitch the app as a marketing platform for brands.

Last month it announced a tie-up with Air Asia, whereby users could earn points towards flights on the airline, aiming to “disrupt the multi-billion dollar Australian points and rewards landscape dominated by the Virgin Velocity and Qantas Frequent Flyer programs”.

It said that it had signed on Quicklfix in a “six figure brand partnership”.

In exchange for frequenting their local business and using the app, users will be able to redeem movie or TV content rewards.

“The next exciting phase is growing our customer base through innovative acquisition marketing and Rewardle will assist in that,” he said.

Quickflix is increasingly leveraging partnerships to increase its user base, signing a deal with fellow SVOD player Presto to act as a reselling agent, whereby the Presto suite of content will be available through the Quickflix platform.

CEO Stephen Langsford previously told AdNews that it would focus on below-the-line marketing in response to its big-spending competitors.

“We're going to be upping the ante in terms of all the ways and means we currently get promotional offers out to market, but we don't have the marketing firepower of our competitors to be up there waging a war,” he said.

In other SVOD news, Fetch TV has launched a partial transactional video on demand (TVOD) model, saying it was “the first pay TV provider in Australia to offer subscribers the option to purchase their favourite TV shows and latest movies”.

The TV store will feature titles such as Game of Thrones, Veep, True Detective and more.