QMS: Outdoor media audiences are rising again even before restrictions are lifted 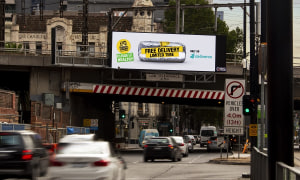 Australians are on the move again, hitting the road and expanding their world after being restricted  by the coronavirus since March, according to data analysed by outdoor media specialist QMS.

The latest data from DYNAMiQ, the measurement platform launched by QMS in January, shows a 26% increase to May 3 in reach (a weekly measure of those who have seen at least one QMS digital large format sites nationally) when compared to the bottom of audience levels recorded on April 6.

But it did have a major effect on outdoor audiences. On April 6, weekly total average reach had dropped by more than half (54%).

“But that was three weeks ago, and the positivity in data since then has pointed to OOH audiences being on the way back - even before restrictions have been officially relaxed,” says Zavecz.

Not all areas have been affected equally. The CBD has been the worst hit with an average drop in total contacts of 71%, year on year for the month of April.

“So, understanding how each state’s enforcement of restrictions and its effect on OOH audiences allows us to accurately forecast how they will bounce back through the recovery,” he says.

"We also anticipate that as we emerge from our isolation and feel able to be out and about again enjoying our mobile lives, this will be matched by renewed attention to OOH messages.

"One of those things that we did not know we missed until we could no longer access it as we were used to.

"So, the new creative advertisers are currently thinking about is going to be exposed to a very receptive audience. Bring it on."