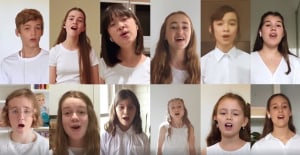 Australia's national airline Qantas has recreated the iconic "I still call Australia home" ad with its partners The Australian Girls Choir and The Gondwana National Choir.

The video features children from the choirs, aged eight to 18, filming themselves on phones in their own homes with the help of their siblings and parents as they sing the song.

The children in the video are located all over Australia from Toowoomba and Wollongong to Albany and Adelaide.

Qantas engaged The Monkeys to compile the footage and develop the final version.

Elliott Wheeler, founder of Turning Studios, was the composer and musical director for the video.

Wheeler has been working with Qantas on creating its centenary campaign launch.

"If isolation and travel restrictions have shown Australians anything, it’s how much they value seeing the people and places they love," Qantas chief customer officer Stephanie Tully says.

"As domestic and trans-Tasman travel restrictions begin to ease, we hope this short video inspires people to start thinking about their next trip, particularly to destinations that are a little closer to home."

The video's launch follows a recent survey of Qantas Frequent Flyers showed around 85% of members are looking forward to planning their next trip.