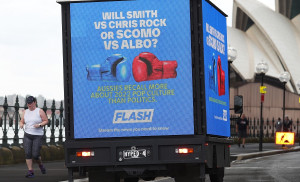 Flash, a news streaming service, unveiled an integrated PR and out-of-home campaign looking at the nation’s understanding of politics and recall of political news relative to pop culture stories ahead of the federal election.

An array of billboards splashed across trucks all over Sydney adhere to the younger demographics use  of trending social media posts.

Another plays on the conflict between Will Smith and Chris Rock at the Oscars: "Will Smith vs Chris Rock or SCOMO vs ALBO."

The campaign, developed in collaboration with Publicis Group PR and communications agency Herd MSL, The Flash Report revealed a gap in political knowledge and recall.

Kate de Brito, executive director of Flash said: "As a product targeting news lovers who thrive on staying informed, the upcoming Federal election provided the perfect opportunity to raise awareness of the platform’s unique offering and drive urgency to subscribe.

“We conducted research to explore how clued up Australians are when it comes to politics and how this measures up to their knowledge of pop culture."