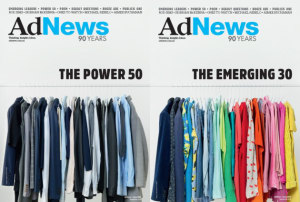 This first appeared in the monthly AdNews magazine. See what's inside here and support AdNews by subscribing here.

With a mission to create awesome and inspiring covers, AdNews hand-picks an agency to work its magic. The cover of the year is voted for by readers.

To reflect this issue's Power 50 and Top 30 Emerging Leaders, we called on Saatchi & Saatchi to take on the challenge. Editor Pippa Chambers spoke with the agency about the process.

What were your initial thoughts on the Power 50 and Emerging 30 brief at hand?

How often do you get the opportunity to have a crack at designing a cover for Ad News? Never.
Our instant response upon reading the email was of mixed emotion: from initial elation and excitement followed quickly with fear and perspiration, especially once we realised the subject matter and the sheer power of the women and men we’d be promoting. The roller-coaster of emotions was a clear sign we needed to tread very carefully and think of all the egos at stake.
It was our chance to create a highly newsworthy cover, maybe even a little controversial and for one of Australia’s leading industry journals. Our CEO also said don’t stuff it up which seemed to give everyone a pretty clear direction…but who listens to their CEO!

Post first brief chat, what went through your mind(s) and what were the next steps you took as a team?

Most of the time our first thoughts are rubbish, and in this instance, they were exactly that so we let the team split apart and do the thing they do best and try and come up with a dozen or so thoughts to get the ball rolling. Some of the initial thinking was really provocative, taking advantage of the tensions that exist for those at the top. Running a powerful organisation is a tough gig, it’s not for everyone so let’s try not mock these resilient machines or they’ll come for us.

We had a few other concepts that individually as covers were more conceptual and provocative but didn’t quite work as well as the “shirts” concept across both front and back covers. The winning idea needed to work seamlessly across 2 awards: 50 Most powerful and Emerging leaders which was quite the challenge. In the end the “shirts” worked best and for many reasons: It was simple and engaging, easy to understand but also challenged perceptions between the old guard and the new through a simple visual device most of us could all relate to.

Who from the team was largely involved and what were their roles?

Tod Duke-Yonge and Michele Verez were the design masterminds behind the initial 20 mocked up concepts as well as directing the shoot. In production the shoot was organised by Deb Munro and Greer Macpherson while in accounts both Suzanne Leddin and Jamie Fairfield helped manage the project from beginning to end.

No real hurdles, just the usual process with no time or money and a lack of resources. This followed with a trickle of highly constructive feedback which then seemed to free flow like a firehose. Once finally approved the CEO and CCO dropped in with some friendly advice and photographic tips, which everyone smiled and nodded to but decide to ignore in the interest of actually delivering the concept for the 2018 issue. Overall it went pretty smoothly.

The shoot was an absolute pleasure and flawless in execution thanks to the amazing team at Prodigious, our stylist Rebecca Rinyow and photographer Sam Bruce.

Any challenges on the day?

Mainly the feedback from the CEO and CCO but they seemed to forget about it all the next day.

It’s very rare to get an opportunity to design the AdNews Cover and its quite different a task from the everyday ad world we live in. Getting to do something so out of the ordinary was the best bit of the process for us! We were given permission to go all out creatively and when we did they reeled us back in of course but that’s how the ball rolls. We’re very proud with the end result and glad we got to make a statement for the ever popular 2018 Power issue.