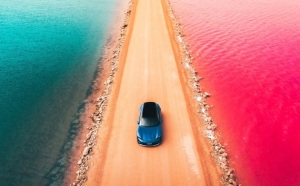 The stunning imagery featuring the two bodies of water either side of the causeway speaks to the duality of the Taycan Cross Turismo. Porsche’s first high-performance all-wheel-drive Cross Utility Vehicle (CUV), is also an all-electric sportscar that furthers the brand’s commitment to e-performance and sustainability.

“What better destination than South Australia for this model and content series, widely known for sustainability and stunning landscapes.”

The content features the Taycan Cross Turismo splitting the two vibrant sections of Lake MacDonnell, with rich blue-green water on one side, and striking magenta on the other.

“The Taycan 4S Cross Turismo was the ideal car for this setting given the idea behind the campaign, and the rugged nature of the roads involved. It was a complicated shoot for Dan and Ben but they nailed it, and Noisy did a great job bringing it all together. The results are stunning.”

The Taycan, the first all-electric Porsche, was launched in Australia in 2021, with the higher-riding Taycan Cross Turismo models now added to cater for the active lifestyle of many Australian Porsche owners. Further Taycan variants will be added to the range in 2022.

“We’re extremely proud of the integrated work we’re able to create for Porsche, and are thrilled we get to showcase both the beautiful surrounds of Lake MacDonnell alongside the equally stunning Taycan 4S Cross Turismo,” said Ben Lynch, Group Media Director & Partner, Noisy Beast.

“With the next generation of Porsche owners being social natives, we’re finding great success in introducing these new consumers to the Porsche lifestyle and passion so embedded in this phenomenal brand; highlighted by Porsche Cars Australia being the fastest growing luxury auto on Instagram over the past 12 months in the country.

“As we know, social channels are more important than ever, with this comes an ever-increasing need for efficient and timely turnarounds. We believe our integrated offering at Noisy of both media and creative allows us to give our client partners a bigger voice; striving to stretch every cent of our client’s dollar.”