Plant for Peace: Probably the most inspiring brand story you’ll ever hear 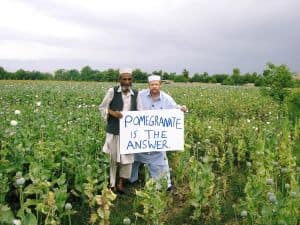 Sometimes marketers need to get shaken out of their comfort zone to think bigger and better.The story of the brand Plant for Peace, delivered at the AANA Reset conference in Sydney last week, did just that.

Plant for Peace is a brand born out of personal tragedy, terrorism, war zones and one man’s mission to make a difference.

Much like the presentation given by OzHarvest founder Ronni Kahn last year – it offered a perspective different to the corporate line that marketers and agencies operate within on a daily basis.

Every brand has a story of how it was created - but all but a few are asinine creations of marketing departments attempting to bring life to a brand’s origins.

Plant for Peace is a not for profit organisation that has created a range of fruit bars, made predominantly from pomegranates grown in Afghanistan.

That’s all well and good. But the story behind Plant for Peace is not at all what anyone would expect. It doesn’t do it justice to call it a brand story. It’s more than a brand – it’s a movement, not just paying lip service to a mission to make a difference or a corporate social responsibility programme – it’s genuinely making waves.

James Brett, the brand’s founder is a man whose person life is littered with tragedy. A miscreant who dabbled in drugs and the criminal life wound up in prison as a young adult, after suffering abuse at the hands of his grandfather as a child, and the subsequent suicide of his mother.

Brett, a red-haired brit from Swindon who was dressed in traditional Afghan dress, delivered a condensed version of the story he usually takes an hour and 20 minutes to tell, in a flow unconsciousness, barely pausing for breath in the 45-minute slot. Only pausing when the emotion got the better of him at several moments in the story.

Finding himself in Afghanistan with a friend who was importing carpets to sell in the UK, Brett was stuck by the ubiquity of poppy farming in the region that fuelled the heroine trade. Counselling was aso vital to getting him back on the right path.

“Poppy fields are beautiful, but they’re growing death, know what I mean?” he said.

He found himself soon founding UK juice brand PomeGreat, which is now a multimillion dollar business. Not that he made any money from it, he says. Instead he had a mental breakdown, was sectioned and installed at a psychiatric clinic for 18 months.

In 2007 he set up Plant for Peace, with the intention of helping small hold farmers in war zones develop a sustainable crop that could do good – and replace poppies.

“Pomegranate is the answer,” he discovered.

Since its inception, Brett has talked with thousands of Afghan tribal elders and leaders – many under Taliban rule - convincing them that the programme is a good idea. Thousands thousand signed up immediately.

There are now thousands more farmers signed up to the programme and Plant for Peace has the support from Prince Charles, actor Rowan Atkinson, Princess Basma bint Ali of Jordan and more.

Part of the reason for the unanimous support from Afghan farmers is that in the last decade of conflict he “was the only person to ever show up without a gun, a badge or a uniform” and talk about change alongside the communities, not a forced change.

An early victory was being part of a move by the Afghan authorities to burn $870 million worth of opium in Afghanistan.

The brand is set to launch in Australian, with Brett seeking retail partners to stock the products, as well as investors to fund planning trees. Virgin Mobile CEO David Scribner was so moved by the story of the brand that he pledged on stage that he would make Plant for Peace bars available in all his telco’s stores in Australia.