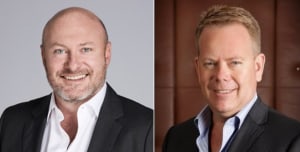 Wiltshire and Scott will work closely with Avid Collective managing director Luke Spano to guide the business on its strategy, commercial focus and product innovation.

“Avid has ambitions to become a global media business and believes it can achieve this through offering products and experiences to advertisers, agencies and audiences that are highly unique, market leading and scalable,” Spano says.

“To achieve this growth, we need to work with senior leaders who have the depth of experience and insight in running and scaling businesses like ours. We need to be challenged by people outside of the day-to-day operations of the organisation and have our strategy stress tested by those who have been an integral part of the industry’s development.

"Peter and Jason’s extensive experience in the media world gives them incredible foresight to be able to guide our high growth business as it establishes itself within the Australian advertising industry.”

Scott has more than 25 years’ experience in the media industry.

He is currently ANZ CEO of marketing intelligence company MiQ as well as a board member of the Audited Media Association of Australia (AMAA).

During his career, he has worked as CEO of Allure Media, with Microsoft most recently as general manager advertising Asia and was also commercial director of joint venture company ninemsn.

He has also worked in management roles at NetX, Euro RSCG and London-based Media Solutions.

“Luke is a motivated founder, a common trait amongst this cohort. But one of the things that sets Luke apart is that he has an enormous capacity to listen. He is leading with a clear idea and a powerfully simple consumer product offering that is both effective and efficient for the market it is serving," Scott says.

“Diverse opinions, experience and perspective are a fundamental platform business leaders need to make the most informed and relevant decisions for their consumers, staff and stakeholders.

"The intent of any advisory board is to offer help during that process across a spectrum of issues and opportunities within an organisation and I am delighted to be working with Luke and his team in that capacity.”

Wiltshire is one of Australia’s most experienced media executives with a career that spans 30 years.

He has risen through the ranks of commercial broadcasting, culminating in his appointment as chief revenue officer across Nine Entertainment Co’s media assets.

Since leaving Nine in 2016 Wiltshire has been consulting to businesses including MediaWorks New Zealand, SBS, adtech start-up Where To Media, and was CEO of Medical Media, where he completed a sale of the business to Swift Media.

“Luke is an impressive young entrepreneur, and I have had the privilege of observing him leading the growth of the business through its early stages, to now be well placed to handle the demands of advertisers in delivering targeted campaigns," Wiltshire says.

"I’m excited to be working with my fellow advisory board members in guiding the management team through the next phase of the business.”

This announcement follows the rapid expansion of Avid Collective’s commercial and digital teams, including the appointment of Tom Gunter as commercial director.

Gunter will also join the Advisory Board.

Avid Collective recently announced a rebrand from Where To Media following considerable growth of the business.

The Avid Collective network has evolved into a collection of digital brands that focus on local experiences, travel, home inspiration, shopping, sustainability, wellness and pop culture.

Alongside the original Where To Media brand, Where To Australia, Avid’s new media brands include ‘Add To Cart Australia’, ‘For The Home Australia’, ‘Where To Travel’, ‘Thriving Planet AU’, ‘Best Life Australia’ and ‘Culture Feed AU’.