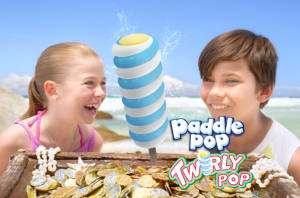 Unilever has been forced to remove an ad for one of its Paddle Pop products after it was found to promote “unhealthy” foods to children.

The ad features two children who find a Paddle Pop Twirly Pop in a treasure chest. When the child opens the chest and eats the Paddle Pop, he transforms into a lion who defeats another animated character.

The tagline reads: "True heroes balance energy intake and activity. Enjoy Paddle Pop as a treat within a balanced diet".

The spot has been upheld by the advertising watchdog, Advertising Standards Bureau, for "appealing to children" and communicating directly young people.

Unilever acknowledged the TV commercial was intended primarily for children, but disagreed it was in breach of The Code.

"Unilever submits that this particular TVC itself- by virtue of its themes, visuals and language - is intended primarily for a young audience. This is also reinforced by the airing of the TVC during children's programming (which is set out in the enclosure to this Letter). Therefore, by virtue of the TVC's content and placement, the TVC is both intended, and is, a "communication directed primarily to Children" and is therefore subject to the RCMI," the company said.

The Obesity Policy Coalition (OPC) said the product is not a healthier choice as it is categorised as a "red food" under the NSW Healthy School Canteen Strategy,

“We’re pleased to see the ASB stepping up to protect children from junk food marketing. We know that marketing directly impacts what children eat and what they pester their parents for. When one in four children are overweight or obese, we need to encourage companies to start making decisions based on ethics and not just profits."

Unilever responded to the ruling from the ASB saying it is committed to responsible marketing and advertising.

“As part of our ongoing commitment to the RCMI and the review process under the ASB, we accept the decision of the independent arbiter and will ensure that appropriate steps are taken to comply with the decision,” Unilever said in a response.

“The TVC will not be rebroadcast and we are in the process of removing it from YouTube. We will also update the Product’s classification in line with this decision.”